Holy CINNAMON ROLLS, Batman!! The most delicious cinnamon roll recipe that you can make in a bread machine!! That's right… the bread machine will do most of the work for you.

So now, we introduce you to…

HOW TO MAKE OUR DELICIOUS CINNAMON ROLL RECIPE

As with anything you bake, there are a few notes that will take your treat from so-so to absolutely divine! So, let's chat cinnamon rolls!

Cinnamon rolls are all about the rising time. Most cinnamon roll recipes require you to allow the dough to rise TWICE. The first rise is before rolling the cinnamon rolls out — you might be tempted to roll it out sooner rather than later, but be sure to give it enough time to double!

When making the filling, you've got two options. Combine all the ingredients and mix well until it forms a paste of sorts. Spread onto the dough with your hands or a greased spatula… OR soften the butter and smoosh it onto the dough, then just sprinkle the cinnamon and sugar over the top evenly. BAM! Super easy!

It's totally up to you. Second option is definitely easier, but some may tell you the first option makes your rolls taste better because the cinnamon roll filling doesn't leak as much!

After your rolls have risen, you'll want to roll them out into a rectangular shape about 1/4 inch thick. The more rectangular, the better, as this gives you more evenly-sized rolls. To prevent the dough from sticking to the countertop, add a little flour.

Once you've accomplished that, you can roll the dough right on up! Make sure you roll it up long ways. You'll want to get a pretty tight roll, then pinch it tight when you finish rolling. Don't let any filling escape!

Now it's time to cut evenly-sized rolls. You can totally eyeball this! But if you put a little dash mark in the dough for each roll, it makes it easier to keep the rolls evenly sized. About 2 inches is what you're going for here.

Pro Tip: Use unscented dental floss or fishing string to make your job cutting the rolls a little easier! This prevents squishy rolls.

Your rolls will need to rise again after you've rolled 'em out and filled 'em up! Add them to a 9×13 pan or multiple pans, if needed. Cover with a towel and let rise.

Pro Tip: Turn your oven on for one minute, turn it off, then cover and let rise in the warm oven — this decreases rising time. Once risen, pull them out. If not, you'll have some funky, potentially burnt rolls on your hands. Now that would just be sad!

Mmmmmm. You ready for this recipe!? 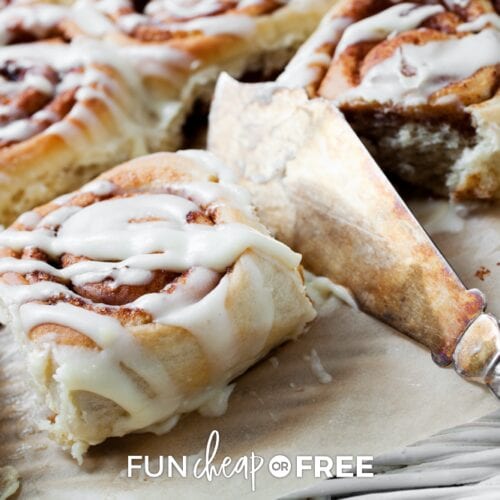 To freeze, get to the point where you add them to your pan, then cover with foil and freeze before the second rise. Thaw in the refrigerator the night before and place in a warm spot to rise the morning you're baking them. Then bake as normal and enjoy how delicious they are!
Keyword easy, make-ahead

Are you drooling yet? Hope you enjoy this cinnamon roll recipe as much as we do! If you try it and love it, please leave a comment and let us know below!

Have you checked out ShelfCooking.com yet? Our brand new site is dedicated to helping you cook delicious, homemade, down-home-cooked meals for your family without spending all your time in the kitchen!

While you're here… Don't forget about our Secret Sauce online budgeting program, Budget Boot Camp! It's our super fun video program that makes money easy to understand. All you need is a screen and you're set!

And don't forget, if you don't save at LEAST what you paid for the program, we'll refund every dime. You've got nothing to lose! Use the code FCFBLOG to get an extra 10% off.

A Kool-Aid Playdough Recipe Your Kids Will LOVE

15+ Frugal Meals to Take to a Friend

How to Remove Sticker Residue - 7 Tried and True Hacks!