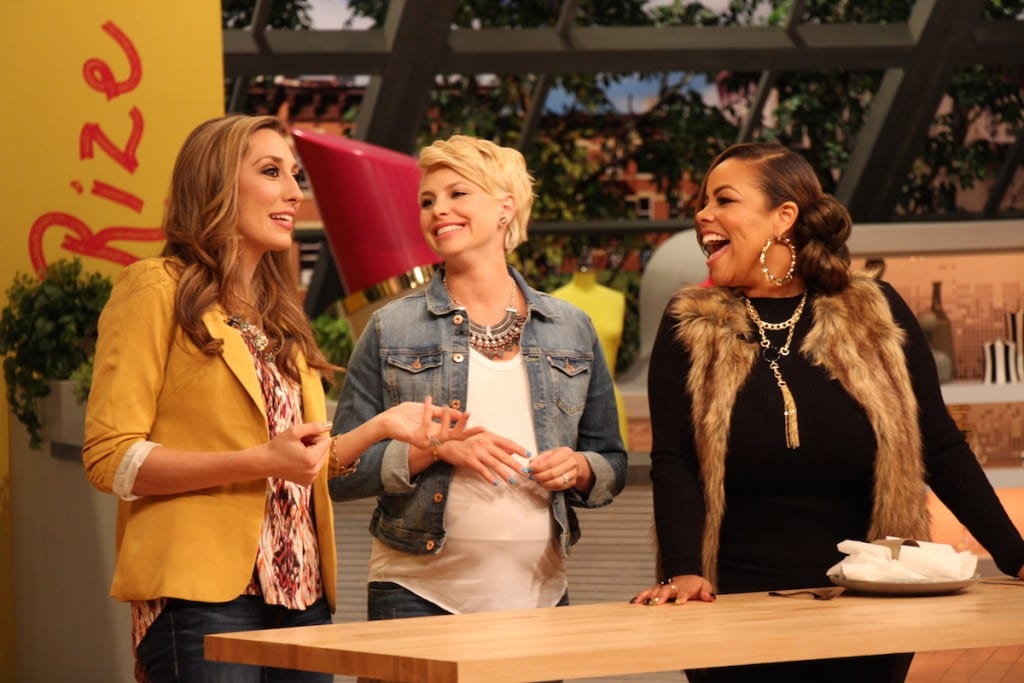 Do you remember that time I was on Tyra Banks' new show, The Fab Life and I totally shared it with all of you and told you all the juicy behind the scenes details?

…oh that's right, that's because other than posting the link on Facebook I completely forgot to share it on here! (Booing and hissing allowed.)

Forgive me! I have good reason, believe it or not. I actually vlogged almost my entire trip and told myself I would post the vlog + TV segment as soon as it went live. Aaaaaaaaand….then life happened and I haven't done either. I've decided not to wait any longer to share the segment with you, and hopefully the vlog will come soon! (Turns out I'm really bad at making videos when I tell you I'm going to, though, so don't hold it against me or hold your breath. Just know that I plan to! Someday!)

So here's the segment, then I'll share a peanut version of my story/experience below:

Watch the TV segment online, or click and watch below:

Ok now here's the quick version of the story, since it's late and I'm pregnant and tired and want to go to bed. Just being honest here, Freebs.

In July 2014 I spoke on a panel at BlogHer, a blogging conference in San Francisco. While there, I saw a note that there was an open casting call for a new ABC Daytime Lifestyle talk show, and that they were looking for bloggers to potentially come on as contributors. There were no other details, but that was enough for me, TV is one of my two most favorite things ever (next to public speaking). I wasn't interested in the lunch keynote speaker so I snuck out and went to the open audition room. It was empty, turns out the casting crew was in there eating their lunch. I apologized for interrupting, cracked a few jokes, and turned to leave but one of them was like, “hey you seem fun, come sit and hang out. We'll just ask you a few questions while we eat.” 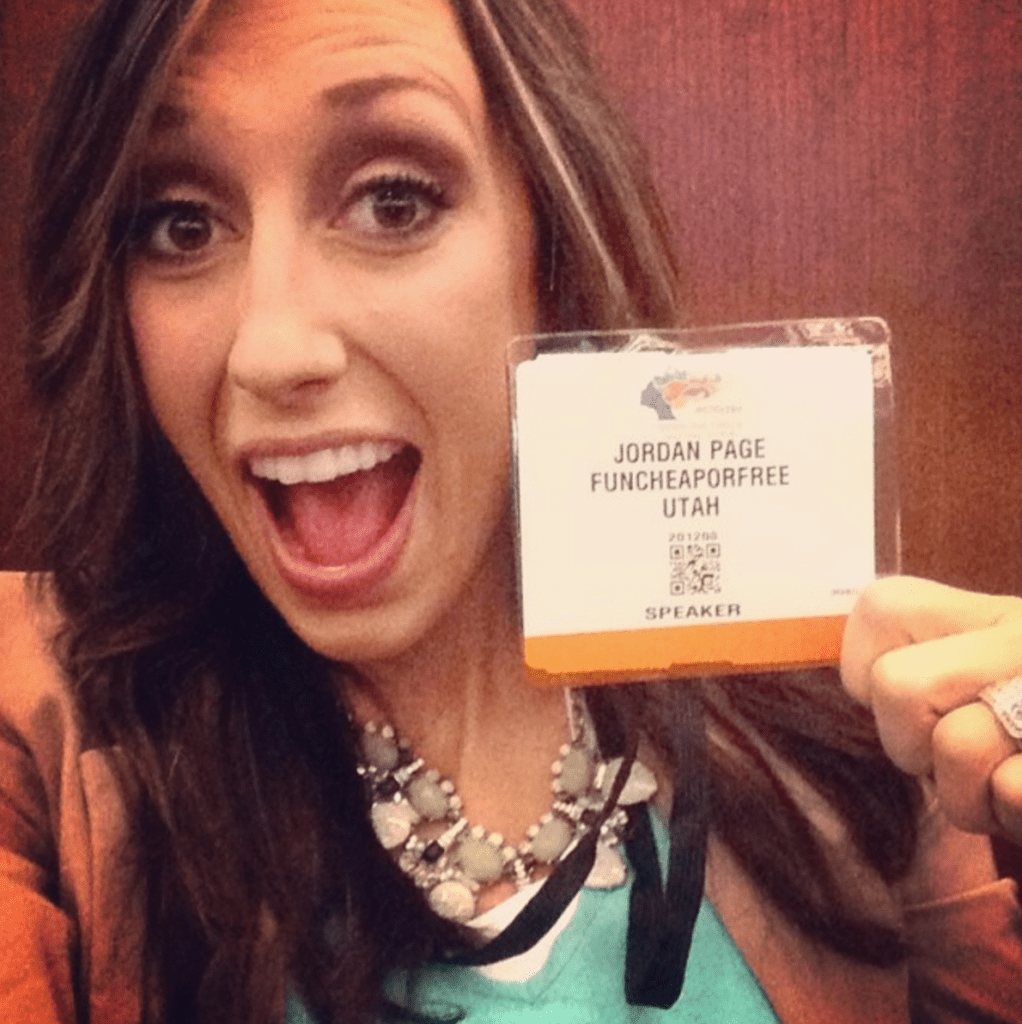 An hour and a half later I was having a very serious conversation with one of the women in the room who turned out to be the director of casting. She explained that yes, they were looking for blogger contributors, but they were also still looking for a 5th host of a new Tyra Banks show…and I might just be a perfect fit.

I was literally speechless. (Ok not literally, I don't know that I could ever be without words. But I was stunned, to say the least!)

They had the DIY, fashion, cooking, and home decor hosts (plus Tyra) but wanted a “mom” expert host as well. Seeing as how I have a million kids (and was pregnant with my 4th at the time), they thought I could be a fit. She even started talking general logistics about me moving or commuting to LA, to make sure I was committed to the next step (and you better believe I was). It was the most flattering, surprising thing of my life. A secret bucket list item of mine I've been working towards for a few years now is hosting a show, so this was pretty much my wildest dreams coming true.

The rest of the weekend I was on calls/emails/texts with them, arranging flights to head to LA to film the season pilot with Tyra and the other hosts. Literally, like, that fast.

I was on my flight headed back to Utah from BlogHer, on the phone to the point where I swear the flight attendant was about to throw me off the plane, trying to figure out if I needed to get off my plane and hop on another one to head to LA instead of Utah. You might be surprised to know that TV is VERY last-minute. Like, you'd never believe it, last-minute. They were waiting for word from the execs to see if they, in fact, wanted a 5th host, and if they wanted me to come film or not…just waiting for lots of approval from lots of people; a TV show is a huge production, after all!

We settled that I would fly home and wait for word. The next morning they decided to bag the 5th host, the “mom” host, and stick with the 4 hosts +Tyra. I was so bummed. But so flattered at the same time that they would even consider me. They said they would love to have me do a segment on the show once it starts, in Fall of 2015. I said I would be honored. I can't remember the details exactly, but throughout the following weeks and months I had a few skype interviews with some seriously influential people (like the head of daytime programming for ABC! Talk about pressure, eh!?). They all assured me that they would have me on the show at some point, and they held to their word! 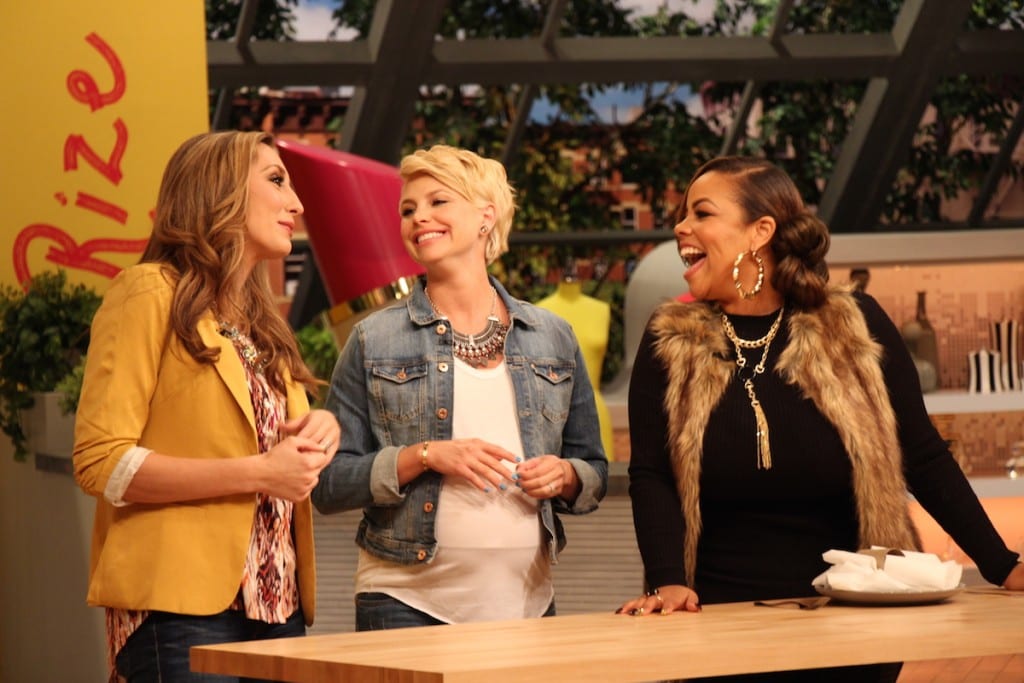 Flash forward to the end of this past summer (2015)/approach of Fall, and we started getting in touch with each other (meaning, the “show” and I) more and more. I pitched a few ideas, did a few more Skype calls, get back in everyone's minds (since it had been over 1 year since we had spoken originally).

I got an email on Oct 21 about doing a segment, and next thing I know was on a plane Monday the 26th headed to LA (told you it was last-minute!). I filmed Tuesday the 27th then flew out after the episode wrapped.

It was such a fun experience! It was a LONG day. I arrived at 10am and didn't leave until 3 or 4. I showed up “TV ready” but still got to sit in the makeup chair while they added darker eyeliner and a bit more makeup, since I'm not used to the stage lights that tend to wash you out.

And sadly, no, I didn't get to meet Tyra. She is a busy woman! Plus she wasn't in my segment so I didn't get a chance, she was never back stage where I was. But I got to chat with Lauren (Trading Spaces host) and Leah (YouTuber), who did my segment.

They are, FOR REAL, the sweetest ever. And gorgeous. I want to hang out with them all the time. And be their besties.

I wasn't nervous for my segment, necessarily, I guess that comes from years of bazillions of TV segments. But I really wanted to do well in hopes that they would ask me back, so there was a little bit of anxious excitement, I guess you could say.

I felt like my segment went well. We laughed and bantered a lot throughout. They ended up cutting out over half the segment (maybe a little more) so you didn't get to see that part, but I think the editing they did was impressive and I think it turned out well – especially for cutting a 5-8 minute segment down to 2 minutes! 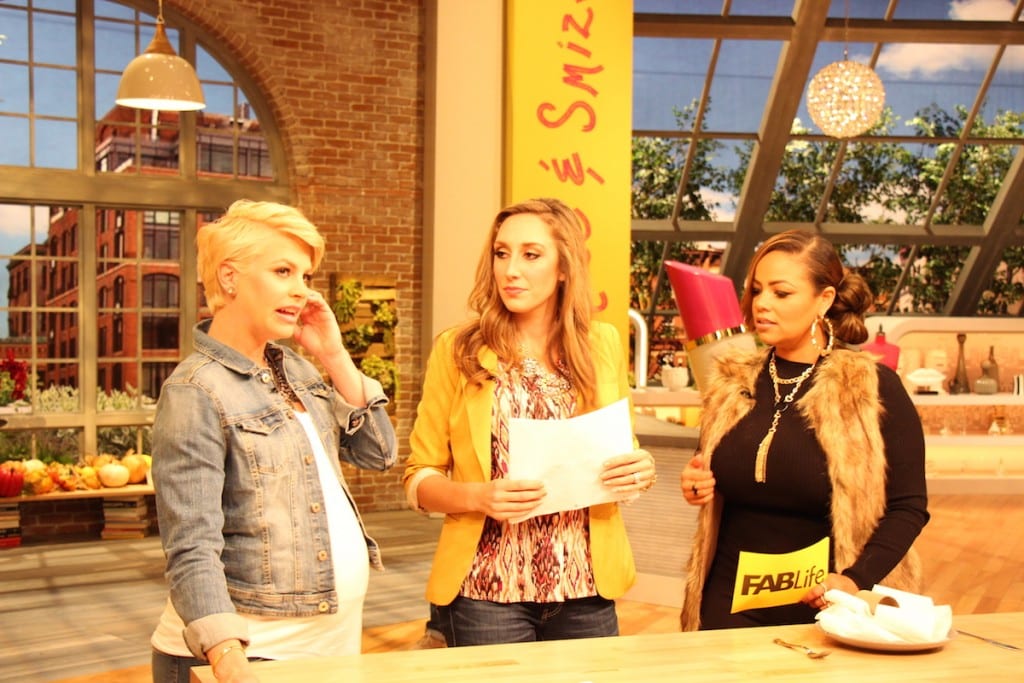 Reading over my segment “script” (notes from the producer) while Leah and Lauren prepped for the segment.

The set is beautiful, the staff was so welcoming and nice, no one felt rushed or bothered by anything. I got to sit in the green room (the holding area, if you will) for several hours with the cutest kids who did a cooking segment during the episode. It made me miss my little guys, hearing them say the cutest things.

After my segment I asked if I could sneak in the audience and they let me. The green room was nice and relaxing, but the audience was so fun! Definitely go if you get a chance. Their “hype guy” (the guy that entertains the audience and tells you when to clap/laugh/etc) was hysterical. It was neat to see the “behind the scenes”, the “audience view”, and the “TV viewer view”. I've done lots of TV segments before, and have been in several show audiences before, but never have I been ON a show with a studio audience before (except The Price Is Right in college, but that's a story for another day).

I walked by Jillian Michaels on my way to get into my Uber car, so that was sweet. She is much tinier in real life than I would have imagined! And stunning, just like she is on TV. And ripped.

I worked at the airport trying to catch up on all the things I neglected over the last 24 hours of being in LA, flew home to smush my babies, and that was that!

What did I miss? Do you have any other questions? Let me know below!

And if any of you are interested, I promise I will add my LA Vlog to the list of videos that I really need to edit and just get on dang YouTube, list. Thanks for reading and watching, just want you remind you all how much I love you!

About Jordan Behind the scenes TV segment
Comments: 6
Share:

Dream Week [the scoop you want me to dish!]