Enjoy this guest post from my friend Lauralee:
It's handy to have ice packs around for various reasons. But the medical-grade ice packs can be VERY expensive! Have you ever considered making your own? 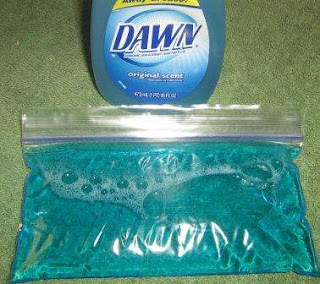 This tip I learned from Dr Sears reciently on The Doctor's. Save money on buying ice packs and take dish soap, pour it into a ziploc bag, select the size you want according to what you would use most, then freeze it. The soap doesn't solidify so it molds to the shape you need, it gets colder and stays colder longer and you can get your kids favorite color of soap so they are more likely to keep it on their injury.

DIY Ice Packs
1.    Select Ziploc bag size of choice (double or triple bag to protect against leaks).
2.    Get a big bottle of cheap dish soap.
3.    Load up the Ziploc about 1/2 – 3/4 full. Close the bag a couple of times squishing out the air each time. Freeze.

**Note: If you read the comments from this post, it looks like adding rubbing alcohol to the soap is recommended!

Give it a try! This could even be a clever gift for a new mom, since we all know kids + any possible hard surface = bumps and bruises.

There have been lots of comments and questions on this one. While I am no homemade ice pack expert, I would think it would be best to:

What a great tip! Give it a try and let us know how it goes!