Our Behavior Chart (which really works!)

Baby #3 will be arriving any day now, which will equate to a lot more chaos in my house.
3 Kids in 3 years? Yup, we might just be nuts.
These last few months I've really been trying to organize my life and get some good systems in place before baby comes. I created a behavior chart for my son that has – LITERALLY – changed my life, and thought it was about time to share it!
Here's the background story…
My oldest child (we call him Hutch) just turned 3 last week. He is such a sweetheart, he really is a good, loving boy. We call him our tender heart because by nature he's an obedient sweetie.
BUT…
He goes through phases where his behavior…well…
just plain sucks.
Unfortunately it can be for days, weeks, or even months at a time where he acts out.
He doesn't listen, throws fits, says ‘no' to everything, bugs his little sister, yells, has a stinky attitude,
the whole 9 yards. 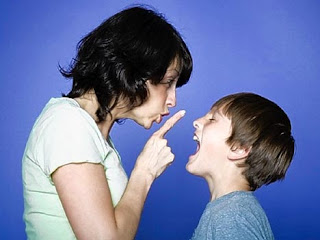 source
I felt like it was an up-hill battle and that my only go-to was time-out,
which just wasn't working.
I was losing my patience more and more with each day, and found myself raising my voice and having to follow up on every single threat I issued, which led to a vicious cycle of him being in trouble constantly. I felt like I was FORCING him to do good things, rather than him CHOOSING to do good things.
Not fun, not effective.
One day I was talking to my husband and said, “I just feel like all I do all day is punish him because it's so hard to focus on catching the positive.”
And a lightbulb went off.
During one of his “phases” a positive act could be as simple as not saying “no” to something, handing me something the first time I ask him to hand it to me, or saying something even semi-nice to his sister. Simple things are hard to catch…so I decided to do something about it!
I stayed up late making the behavior chart that changed our lives!
Now, here's my disclaimer…
It's not pretty, but it's pretty functional so have fun making yours MUCH cuter than mine! 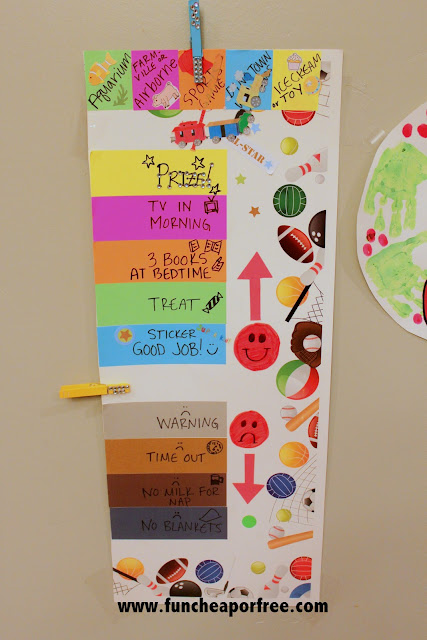 Here's how it works:
Take two clothes pins and decorate them all cute. I painted mine and added rhinestones to them. Every morning before breakfast I have my son choose which prize he would like to earn that day and we put a clip on it. It's routine; I always say, “Hutch! What prize would you like to earn today?” and he looks forward to it every morning. Move the top clip to that prize square. 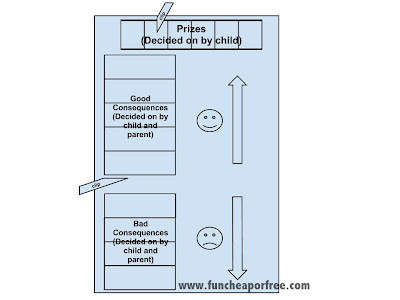 Start the second clip in the blank space between positive and negative consequences. Every time he does something positive throughout the day his clip moves up. If he reaches the last rectangle on the “happy face” (positive consequences) side, he earns the prize he chose at the top of the chart. Likewise, every time he does something naughty the clip moves down. So he could earn the prize at the top, but if he is a stinker at bedtime I can still move his clip down. The final consequence isn't set until he wakes up the next morning.
So positive consequences are issued the next day, however, negative consequences are issued immediately. More info on this below.
Every morning we run downstairs and see where his clips ended up yesterday, because that's what he earns TODAY. Once we see what he earned from the day before, we issue the positive consequence. If he gets to the top and earns a prize then we set a time for that outing that day. We then put his clip back on the black spot to start over for that day, pick his prize that he wants to earn that day, then throughout the day I move his clip accordingly. We start over every day and it works great!
So, now that you know the basics…
Here's how to do it: 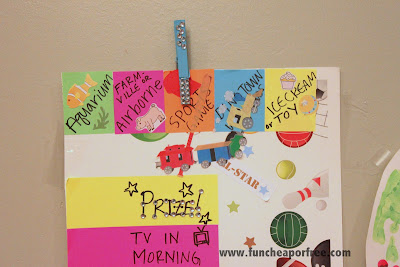 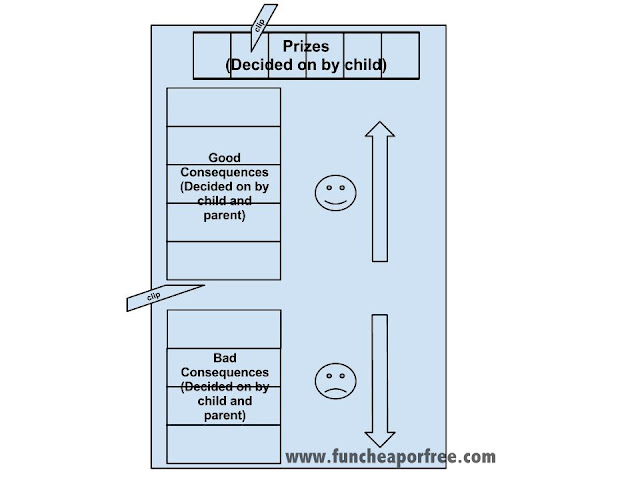 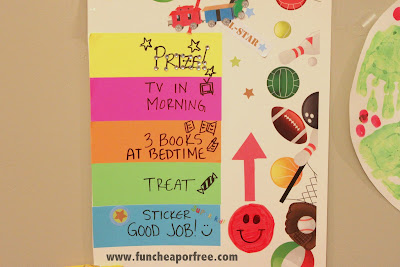 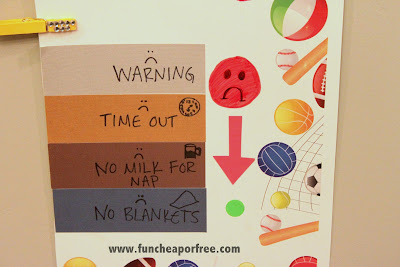 Remember…I never said I was an artist, people! 🙂 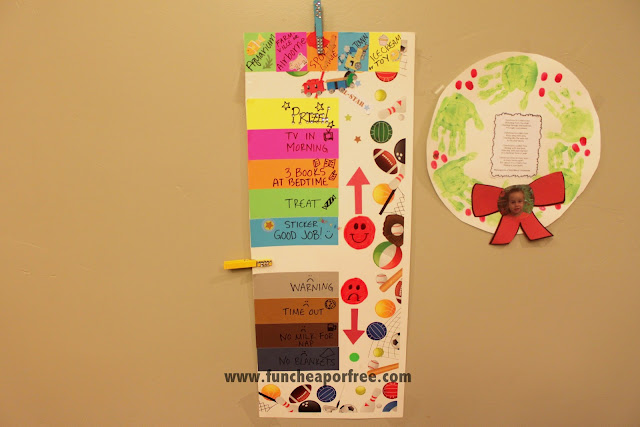 So that's it! Throughout the day move the clip up and down according to their behaviors, and hopefully they'll make it to the top of the Positive Zone and keep it there so they can enjoy their big prize the next day!

To adapt this for multiple children:

To adapt this for older children/teens:

Once again, this chart has really changed my life. Even though many of the prizes/outings are things we might've done anyway, the fact that he CHOOSES to earn them makes them much more rewarding…for him AND for me! 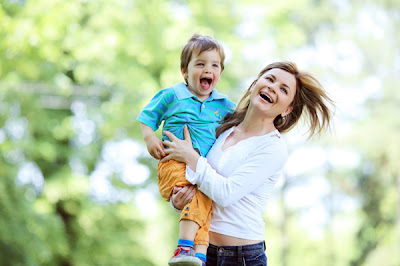 I encourage you to try it, and let me know if it works as well for you as it does for us! We have been doing this chart for a few months now and it STILL works just as well today as it did when we first started. Good luck, and happy clip-moving!