Follow us
Costco, Finances, Food, Get Out of Debt, Grocery Shopping, Shopping Tips

Why Costco and American Express are Breaking Up…and What to Do About It! 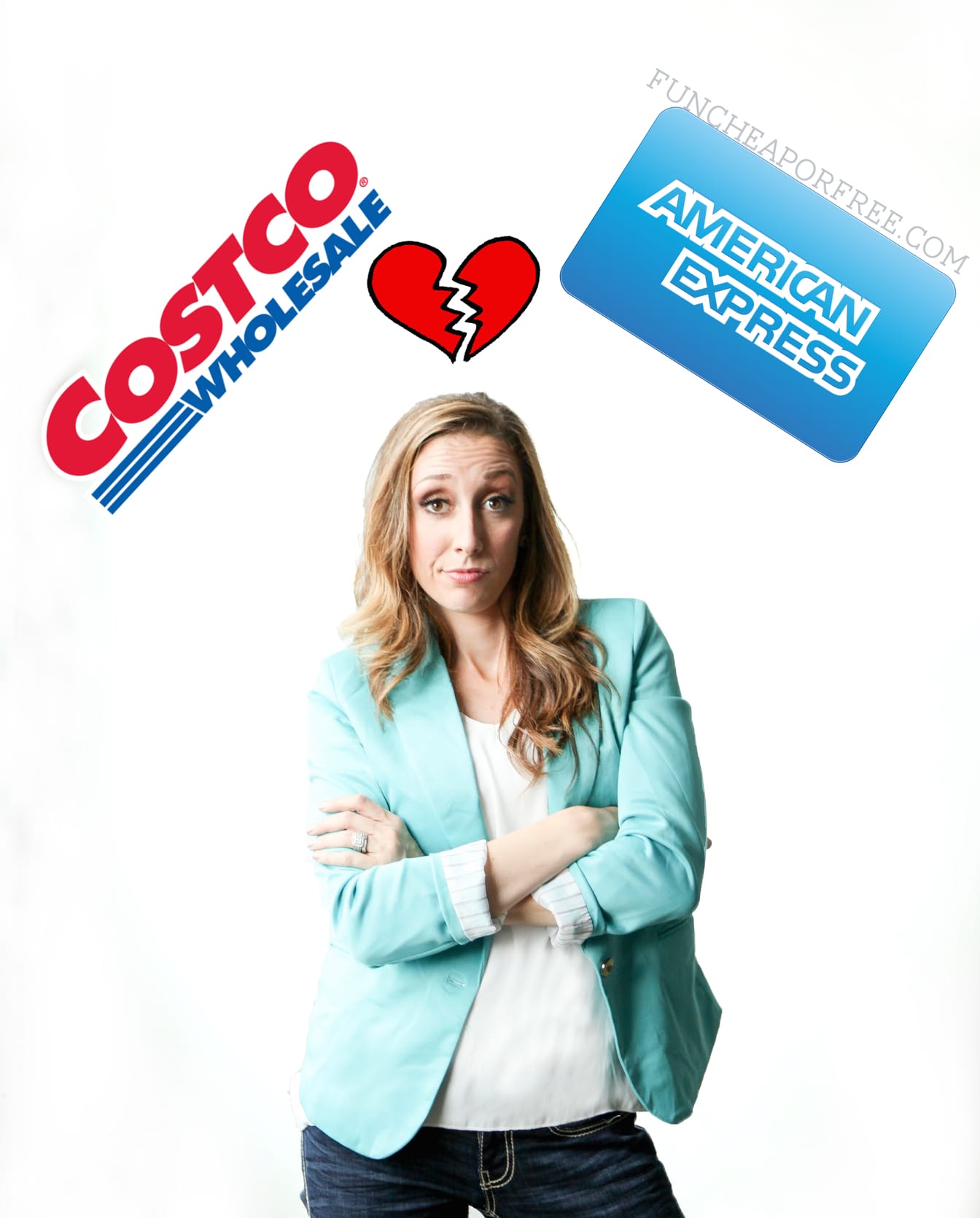 Word has gotten out that Costco and American express will no longer be working together, so I'm here today to set the record straight since I've started getting lots of questions about it from Freebs like yourself. Seeing as how I've become somewhat of a Costco expert over the years and all (how? See below!) I wanted to stay on top of the issue. I did a little sleuthing and got to the nitty-gritty of this breakup!

I thought I'd share with you WHAT I learned, HOW it affects you, and WHY it affects you (and what to do about this whole fiasco, anyway).

Let us start at the beginning, shall we?

WHY are Costco and American Express breaking up?

If you've ever shopped at Costco, you know the only way to use a credit card to pay for merchandise is to use an American Express card, the most benefits coming from their Costco-Specific card. They have had a loyal relationship with Amex for 16 years and it has been all fine and dandy…until…

According to staff at Costco (whom I politely drilled) they explained that Sams Club has recently signed an exclusive deal with Discover card, which allows their members 4% cash back. Costco, being the big dawgs they are, refuses to be second best; their card only provides 3% cash back.

Costco approached Amex telling them (in my own words, of course) that they want a better deal than the Discover/Sams deal, and want to offer their members 4% or higher. Amex allegedly said no initially, then offered the solution that they would then need to raise their interest rate to make up for the higher percentage.

Costco wouldn't accept it. Thus, after what I can only imagine to be exhausting negotiations, Costco decided to retire their long-term relationship and jump ship.

WHAT will the new card be? WHEN will the changes take place?

The new partnership is with VISA. Costco will officially end their relationship with Amex on March 31, and VISA will start April 1.

WHAT should I do about it?

Nothing yet. We don't know what the card details are, what the cash-back % or interest rate is, nada. They are supposedly still in negotiations or at least haven't announced details yet.

Unfortunately, I'm not going to tell you exactly what you should or shouldn't do…but…

Here are some tips on how to know what to do:

UPDATE: Here's a fabulous comment from a Freeb, Danielle:

Freebs! I just chatted it up with AMEX to figure a couple of things out and boy did I learn a lot. So I was a little worried that once the partnership ended we might be charged an annual fee for the card. When I first applied for mine they said that your Costco membership essentially waived the annual fee. They informed me that no additional annual fees would be assessed. Whew. Then I asked if the cash back categories outside of Costco would remain the same and they said yes they would. Then the person chatting with me said that she would suggest applying for the Blue Cash everyday card because it has good cash back. When talking more with her about this I discovered that this was because your Costco/AMEX cash back can only be redeemed at Costco. Therefore, after the breakup you will still earn cash back but never be able to access it or redeem it. Which in my mind essentially makes the card worthless (though like Jordan said I will still keep it open to help my credit). So for me that was a huge deal and I though that the world should know. If anyone hears anything different from AMEX let me know, but I am almost positive that is the situation. Also, basically February will be the last time you can really redeem any of the cash back, even though the deal doesn’t end til April.

Thanks for sleuthing and sharing, Danielle!! XO

How do YOU feel about it?

Well, thanks for asking! (…perfectly posed question purposefully placed so that I can get my loud-mouth opinions out to the world…) Now, this is where OPINION comes 100% into play.

Honestly, I trust Costco. I have seen and experienced first-hand how much their members are a priority. So while I'm bummed that they are breaking up because I truly love Amex (I'll explain why in a second), I have a hunch we will make out better for this deal. Heck, 4% instead of 3%? If they can pull off something like that, I'm an instant fan.

Now, I need to do my research and look into this new card when it comes out. But realistically it will most likely make sense for our family to get the new card because we pretty much only shop at 2 places: Walmart, and Costco. Is it annoying to apply for a new card, but we can handle a slight ding in our credit score (both of ours are in the 800's right now). But again, this is a very personal decision that it really just comes down to doing your research and weighing the pros and cons.

So…how do you know so much about Costco? And why do you talk about it so much? Do they pay you?

Psshh, I wish they paid me! Heck, they don't even have an affiliate program. Costco doesn't know I exist, sadly. My dream of all dreams is to be their spokesperson someday; their Flo (Progressive commercials) of sorts, but in real life. But alas, they don't advertise, sponsor, sell, recruit, promote, or push anything. No need to! Those advertising dollars would have to reflect back on the customer and they would have to raise their prices, which would go entirely against their business model. So I guess it's a good thing. (Costco, I'd do it for free, you know! *shouted desperately, standing in the rain like in a dramatic teen romance movie*)

Why do I talk about it so much?

Honestly, I believe in the company. I respect it to the core. The prices and value, quality of products, customer service, how to they treat their employees, entire business model…slow clap. It's unmatched and unheard of. I just totally respect them. And honestly, a lot of what I share (and what I get the most questions about) has to do with what WE do as a family. We shop at Costco, so I'll tell you all about it when we do.

How do I know so much? Easy.

I pay attention. And Ask.

I basically ask a new question every time I go. I read articles on it, watch TV segments on it, and even got a personal behind-the-scenes tour from a Costco GM who saw me talking about Costco on the news and wanted to give me info that is not easily found. (Yes, it was like Disneyland for me!)

Over the years I've become the resident Costco expert and have been interviewed in articles, on TV, and even in Magazines about it. Oh haaaaaay, Women's World! 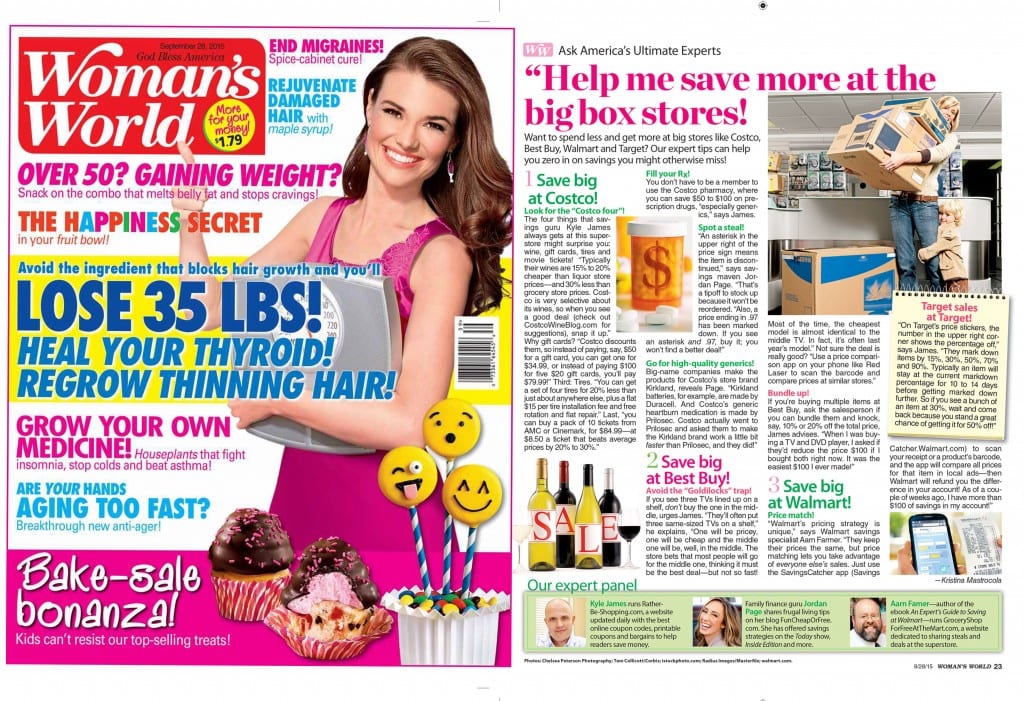 So there you go! Hope that was helpful. If you need to know anything about Costco feel free to ask. If I don't know it off-hand, I'm happy to find out.

Be sure to check out my COSTCO PAGE to get all my best tips in one place.

Hope you have a great Tuesday!

Budgeting, Finances, Get Out of Debt

How Do Credit Cards Work?

#Stocktober challenge + buying bulk, shopping at Costco, & stocking up on a budget!

Which Costco Membership is worth the money? + Costco Visa changes!!