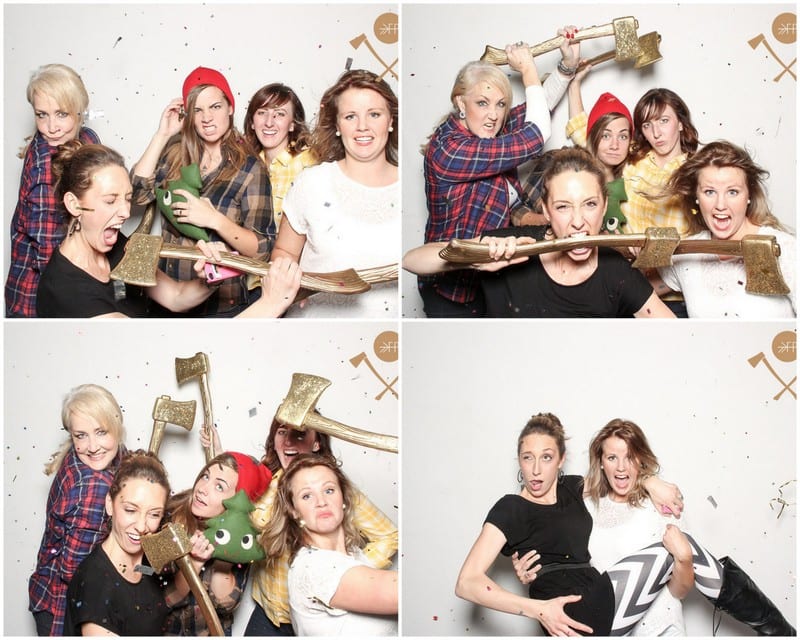 We had lots of fun this weekend/week + last week! Here are some of the fun/cheap/free things we've been up to:

I did an open-invitation grocery shopping trip (as posted on Instagram) to help show y'all how I work my price-matching magic. Follow me on Instagram to see when the next one is! I used Deals to Meals of course, and walked away with some MAJOR loot for 30-50% off (even more on some stuff). 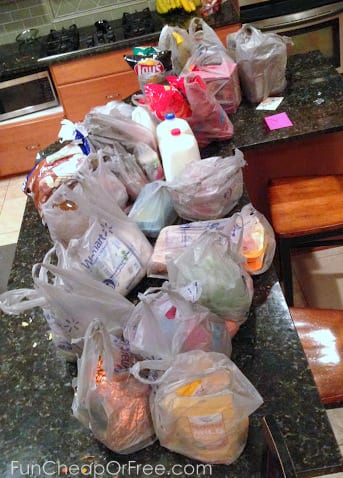 Seriously, come with me next time! I figure if I'm going anyway, might as well bring some reader friends along to keep me company 😉  – P.S…Read how I grocery shop for those who think I'm a creeper and would rather not go shopping with me, haha. 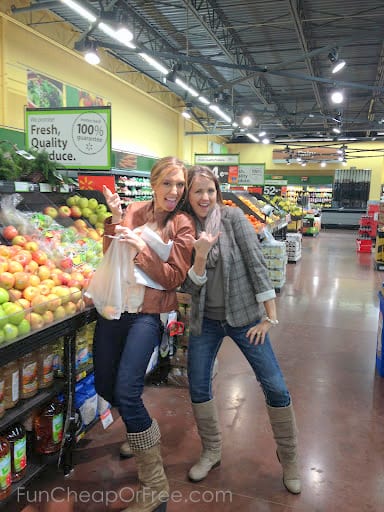 While shopping I picked up some discounted meat. No, it's not going to kill me, no it's not rotten, and no it doesn't taste funky. It's perfectly fine! It's just approaching the store's “sell by” date so they have to get it out of the store. I toss it in my freezer as-is, easy-peasy. 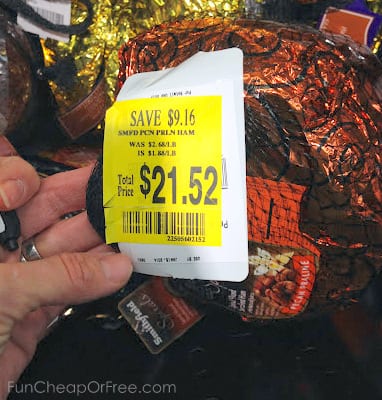 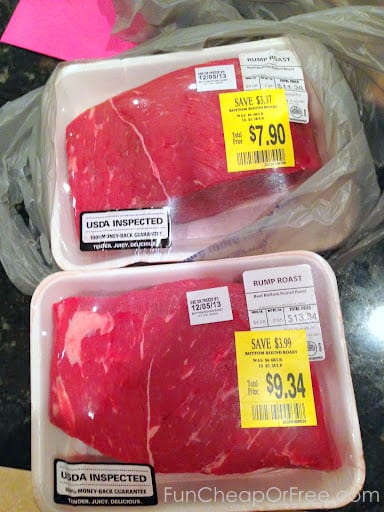 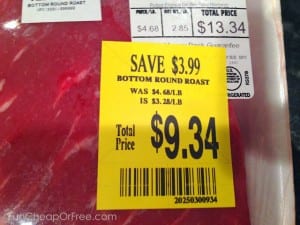 I love me some yellow stickers. I'm drawn to them like a moth to a flame. I think they are beautiful. The most beautiful stickers in the world. I could marry them.

Before I went shopping we literally had NO FOOD IN OUR HOUSE because we had been on vacation for over a week. Instead of running out and grabbing takeout, I went to my freezer! I wiped out my freezer meals, so I'm working to replenish them now. 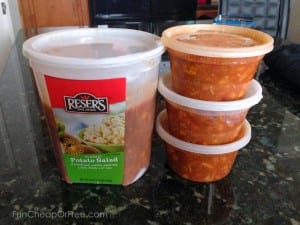 Remember…when you cook, double it and freeze it for heaven's sake! Then on a day when you forget to plan dinner, are too tired to cook, or don't have anything in your fridge, pull some of these bad boys out and feast. I like to freeze my food in leftover food containers so I can preserve my expensive tupperware.

We finally put Christmas decorations out. My kids were in heaven decorating the tree. I let them do 100% of the decorating. Remind me to post a picture, it's hilarious. As is my baby… 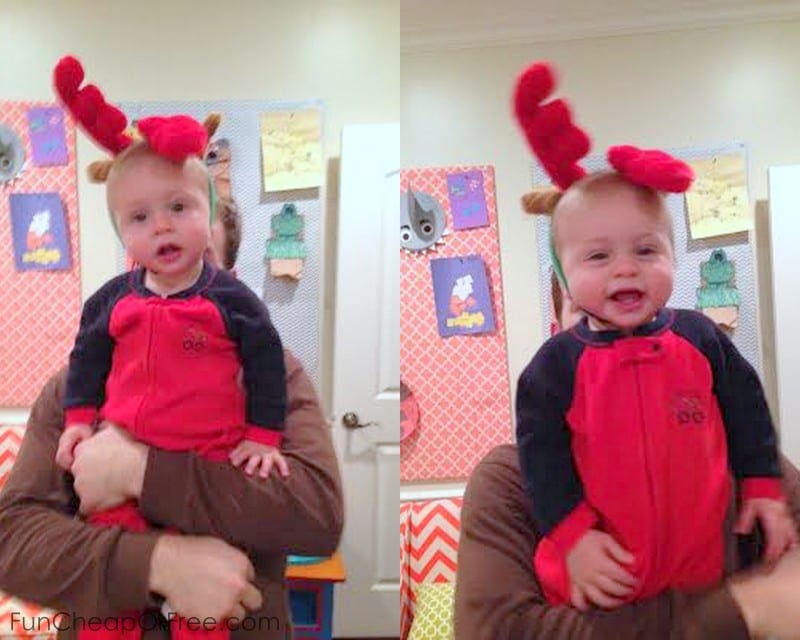 I've been trying to keep my kids busy with simple Christmas crafts/activities. This week we made snowflakes, 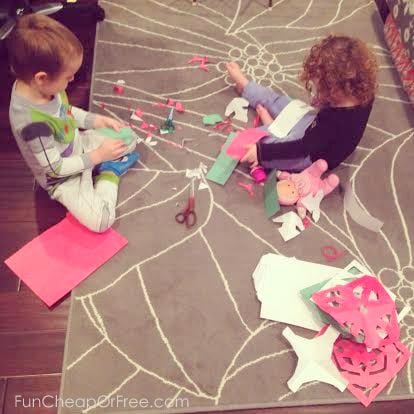 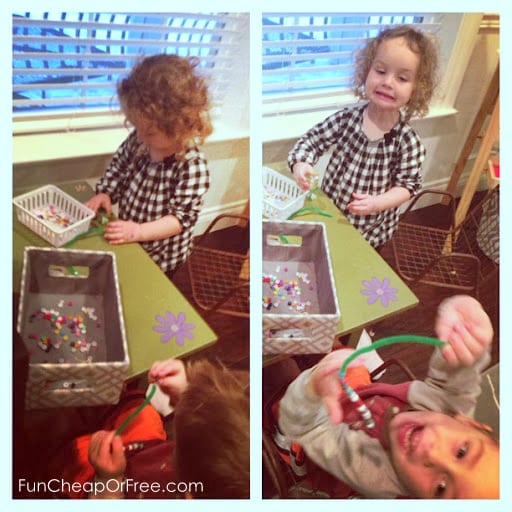 I went on a hot date with my bestie since college, Bree, while my hubby watched the kids, earning major brownie points. 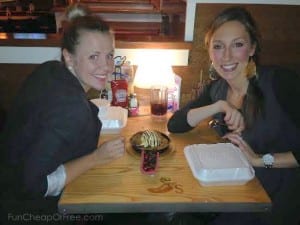 We went to Chili's and took advantage of their 2 for $20 deal. I searched online and found a coupon but I couldn't get my darn phone to load it so it didn't work out. But $10 for dinner still wasn't bad.

It snowed! Lots! I moaned and moped because my van is a wuss in the snow, then we went out and played. 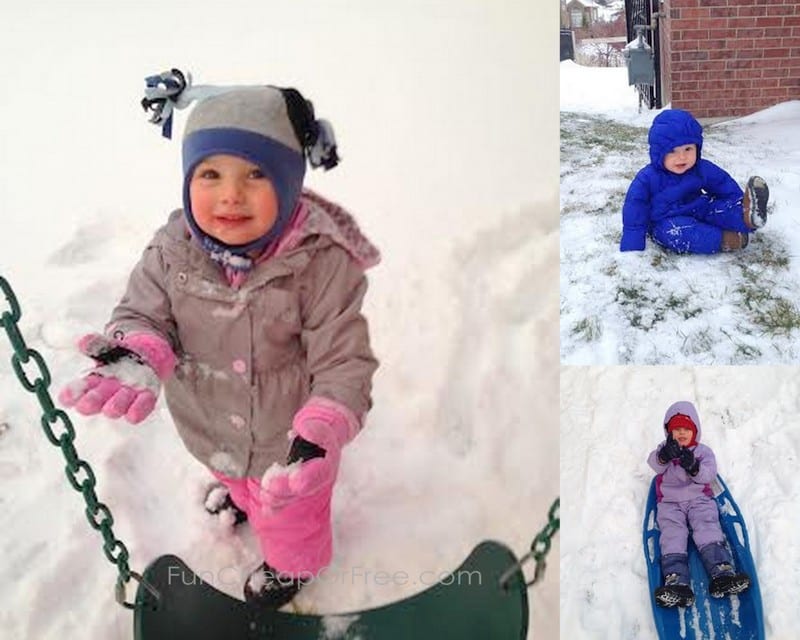 Don't you love my kids' modgepodge snow outfits? Everything (even boots) was a yard sale or hand-me-down. Poor Hutch got stuck in the all-purple suit because that's what fits him right now. He really didn't seem to mind. And really, nor do I. (They're kids for heaven's sake. Hutch can't even remember his middle name, let alone what he wore to play in the snow.)

I danced my ax off…and took the most awkward SmileBooth photos in existence while doing it.

No, but really, how bad is my face in all of these??

We did lots of fun family activities this past week+ . We went to the Festival of Trees here in Utah…and didn't look at a single tree. No lie. We watched dance performances, and watched kids stand in a giant bubble. For like, 30 minutes. 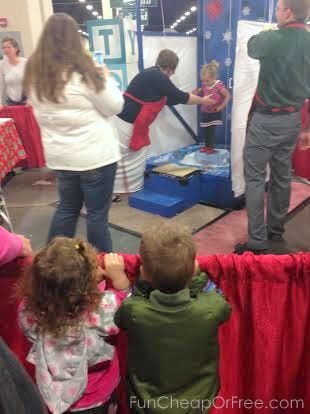 We were fully prepared to pay the ticket fee (it's for a good cause!) but the nice lady at the counter saw me alone with my 3 kids (Bubba was parking) and must've felt bad for me because she gave me the tickets for free. We really are a spectacle in public, so it makes sense. 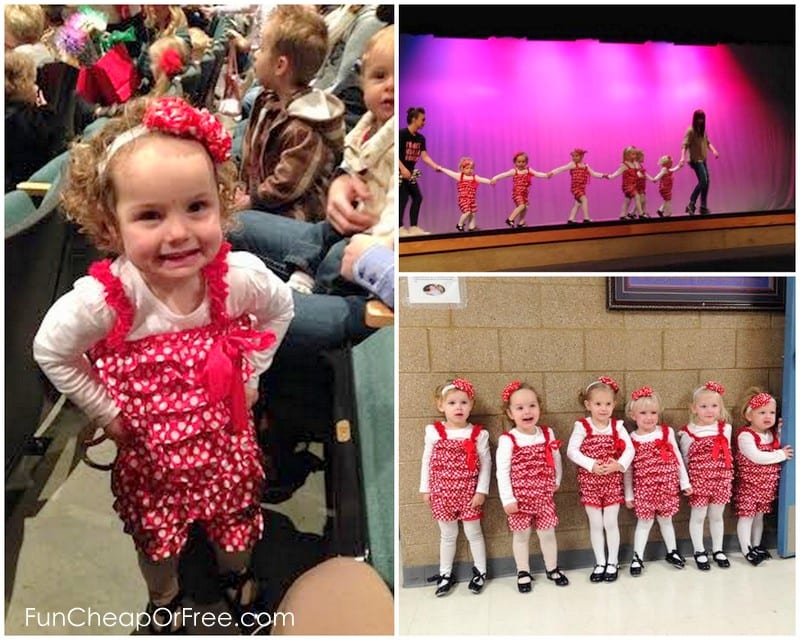 I thought my heart would burst from absolute cuteness, and pride + hope that she becomes a little dancer someday so I can live vicariously through her. I miss dancing so so so so so much…

Later that night we went to dinner as a family. Bubba and I shared a burrito, and the kids all got free kids quesadillas so it was pretty darn cheap. And delish. Hutch insisted on wearing his woody hat (thrift store find) to go with his cowboy boots ($2 clearance at Target, 3 sizes too big). 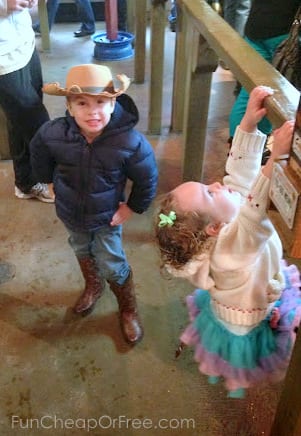 Hey, at least he was wearing pants. *fist bump*

After dinner we swung by some amazing Christmas lights on the way to the local High School's dance company performance. 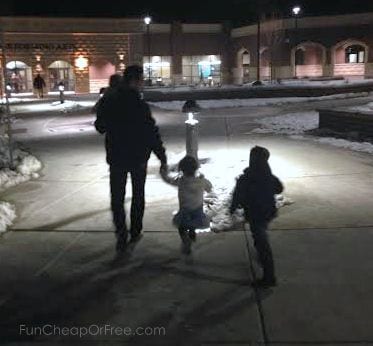 It took every ounce of energy we had to restrain Priya from jumping on stage because apparently she now thinks that every performance done on a stage involves her. After a few minutes we wised up and found a dark spot in the back of the auditorium and let the kids run and dance in the isle to their hearts' content.

We saw a some free entertainment this week.

Bubba sits on a board for Junior Achievement (coolest youth program ever), so we got to see our local theater's version of A Christmas Carol as a “thank you” from the program. It was the best version I've seen yet! 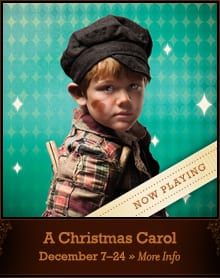 Bubba and I were also invited to a company's private showing of The Hobbit. It was awesome…until that one part where they completely stop the movie at the climax before resolving anything and leave you with the biggest cliff-hanger headache ever. 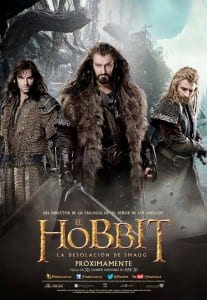 Another movie we saw this week was The Saratov Approach. It was incredible, everyone should see it. We saw it on a complete whim. After the above mentioned high school dance performance, we sped home, threw the kids in bed, grabbed a last-minute babysitter, then headed to a 9:45pm movie with friends at Watergardens discounted theater using free passes I had. We are rebels. And yes, I'm still tired from it. And no, I didn't take a picture…which is too bad because we had a hilarious time and could've captured some doozies.

At home we watched Carrie Underwood's version of The Sound of Music. 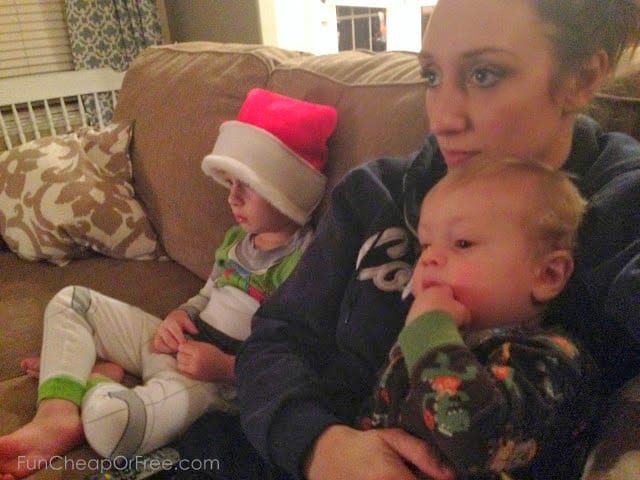 We still stand by the fact that our #PageHousehold version is better.

We threw a dessert party for our neighbors who are moving. We have tried really hard to sabotage their leaving, but it hasn't worked…so we figured we'd fatten them up and send them out with style. 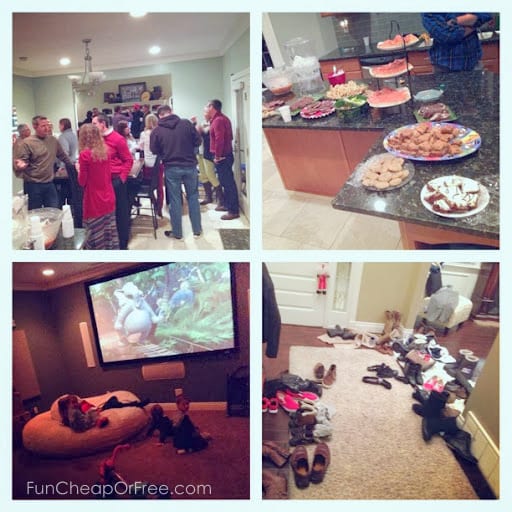 We have finally mastered the dessert party; it was so easy! Guests brought lots of great desserts, we had entertainment for the kids in the basement so parents could chat upstairs, and the baking/set-up/cleanup was so easy. The desserts I made were awesome (I hate baking, remember?). I promise to post the recipes soon.

We ended our week by using Sunday to plan out the next week. 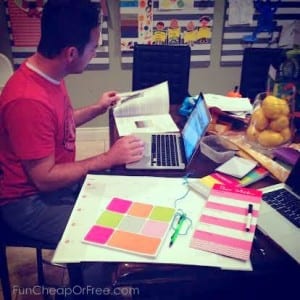 What were you up to this week/weekend? Anything fun?