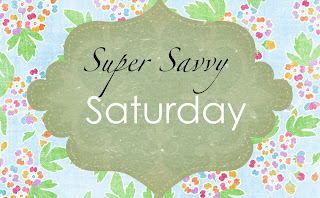 Welcome back to another Super Savvy Saturday craft project!

It's official.
I'm obsessed with this one.
OB-SESS-ED.

This is seriously the cutest and easiest thing on the planet! I plan to make a bunch of these for the 3 (yes, three) baby showers I'm throwing in the next few weeks. Just thought I'd share! (P.S…this is a great way to reuse that old scrapbook or cardstock paper that's lying around your craft room!!)

I found this tutorial HERE. The circle garlands from the graduation shoot were super easy to make and created a nice pop of color and fun to the backdrop. They did require the use of a sewing machine-but I promise that I only have rudimentary sewing skills and by no means can I do much more than sew a straight line. Sometimes not even that. (It’s made me pretty handy with a seam ripper!)
Supplies:
– Colored card stock. I liked the effect using several shades of the same color together created.
– Circle puncher : in these photos, a 2 inch and 1 inch was used
– Sewing machine loaded with complimentary colored thread To Make:
1. Punch your circles. 2. Fire up your sewing machine! This part is easy, I promise. Stick the paper circle under the foot and hit the gas, stitching through the circle. As soon as the paper clears the foot, stick the next one in. I think this garland looks best perfectly imperfect, so I in no way tried to create even spacing. Which makes it even easier to make. 3. Repeat until garland is the desired length.
I used a repeating pattern (for the most part) of two big circles to three small circles. To create the backdrop in the graduation table, I made six separate strings of garland and hung them. Easy peasy! Hope it helps add a little extra easy festive to your next party!