***UPDATE: Click HERE for an even better way to cook your pumpkin! Way easier.

Still have pumpkins lying around from Halloween? This year we somehow managed to accumulate 4 huge pumpkins (I got 2 for $5 from Walmart, then 2 free ones from buying a Groupon certificate to a pumpkin patch). We didn't get around to carving them this year.

Now that Halloween is over I worried about simply throwing the pumpkins out. I am a compulsive non-waster; I HATE wasting things! So I consulted my mother and decided to get creative with our pumpkins.

Who doesn't love pumpkin pie, pumpkin bread, pumpkin bars? Um, yes please. Cans of pumpkin are at least $1.50-2.50 on average. That adds up!

Today's tip:
Make your own pumpkin puree for all those yummy treats! The process is very similar to making your own baby food in the crockpot.

First, I cut my pumpkin in half. It was tough; took some sharp knives and elbow grease for sure! 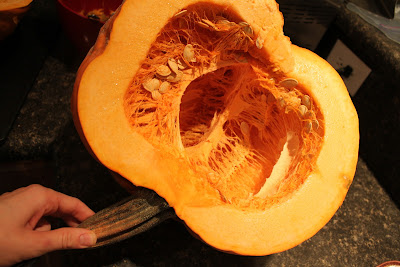 Next, I scooped out the insides, preserving the seeds to roast later. 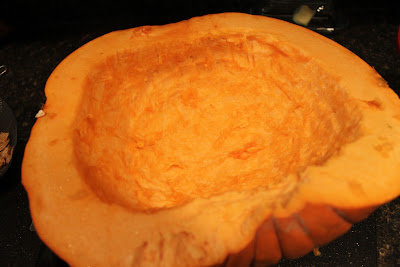 I diced up the pumpkin (I did it like a cantaloupe: in wedges, removing the hard skin), threw it in a greased crockpot on high for a few hours, kept an eye on it so it wouldn't burn, and let it sit until it broke down pretty easily.  By the way, my pumpkin was HUGE. I only diced up 1/2 of it and it took 3 small crockpots! 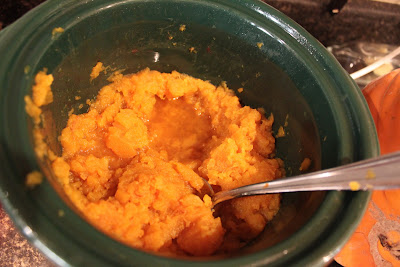 I put it in a food processor, blended it up super well, and that's it! 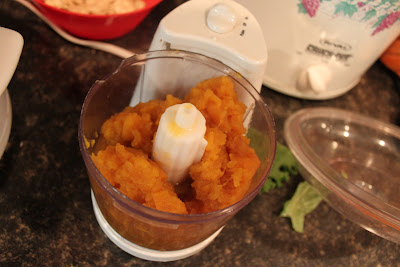 I filled a bunch of empty “stage 3” baby food jars, labelled them, and stuck them in the freezer. Now I have plenty of pumpkin to feed my baby (it's SUPER healthy) or have pumpkin puree for all those tasty pumpkin recipes that we all love!

Oh, and just for the record, I have only cooked 1/2 of my FIRST pumpkin (I have 3 more to go…) and I have over 13 full jars of tasty, au natural pumpkin. What a deal!

So next year, maybe consider painting your pumpkins rather than carving them. It's just as fun, but you will get so much more out of them!

Happy savings to you 🙂