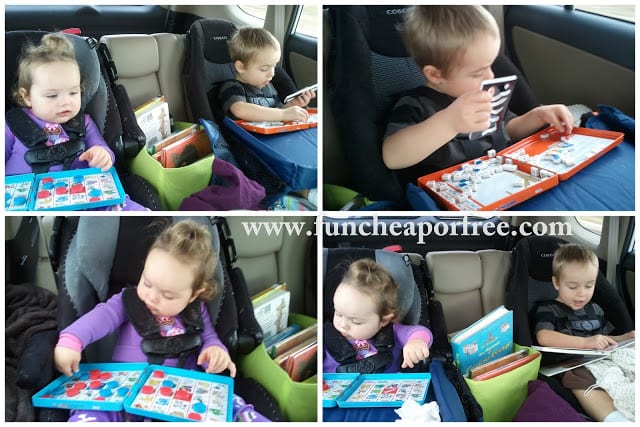 My hubby, kiddos, big ol' dog and I went over the river and through the woods for Thanksgiving to my in-law's house in Arizona. At 11 hours the drive is better than our drive to Oregon to visit my family, but still LOOOOONG nonetheless.

Since my kids are little (almost 3 and almost 18 months) and I'm getting increasingly pregnant by the day (about 27 weeks) I dreaded the drive to say the least. I used some of my tips and tricks that I explained in THIS POST, but did some things different this time around so here's my smushing of the old post and new post. Hope this helps some of you!

*Note: I'm using amazon pictures and links to help illustrate what I'm talking about since I didn't take many pictures. I hope they help!

One thing I did this time that I absolutely loved was that I arranged for cleaning ladies AND professional carpet cleaners to come while we were gone! (Merry Christmas to me.) I left the checks and  my house keys with a neighbor, who let them in and locked up when they were gone. It was absolutely INCREDIBLE to come home to a spotless house. Plus, it gave a week for our carpets to dry fully before we walked all over them. I told my husband we're making this a new tradition! 🙂

Entertaining the kiddos in the car:

One of the toughest parts of road trips for us is keeping our young kids happy. Especially my 16 month old. She HATES the car as it is, let alone sitting in one for 11+ hours! 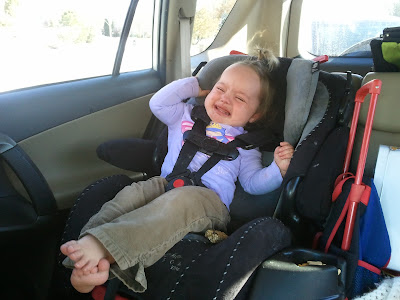 See? Told you.
And yes, this was on a quick drive to preschool, 10 houses away.

Here are a few things I armed myself with for the drive:

My son is easy. He could watch movies on my ipad head rest holder for the full 11 hours (our friend has a TON of movies on a hard drive so we borrowed some kid movies for free to put on my ipad). BUT…I don't want his brain to turn to mush, and I want both kids to be entertained. So while I do allow my kids to watch a few movies (especially when they're extra cranky) I try to keep them entertained with more stimulating things.

**Note: Everything I bought to entertain the kids (like the trays, sticker sets, and my son's electronic letter game especially) came out of their Christmas budget. Don't go spending a lot of money unless you're willing to have it come out of a budget somewhere!

I gave my daughter her Christmas present early, which was this activity tray

:
It was so nice to have!!! The whole drive to AZ I wished that I had bought another one for my son also. I wised up and found a plastic green one for $6.99 from JoAnn Fabrics in Arizona to use on the way home. I don't like it as much because you can't fold it up and tuck it away, but it worked. See pictures below in the post to see the green one.

These are SO GREAT for the car, because it makes it harder to lose pieces. I got three sets of brand new magnetic games at a yard sale for $.75 each. One of them is farm animal bingo, which my son got a kick out of. My daughter loved them too! I just had to make sure to give her one with big pieces so she shouldn't choke if she decided to taste one. 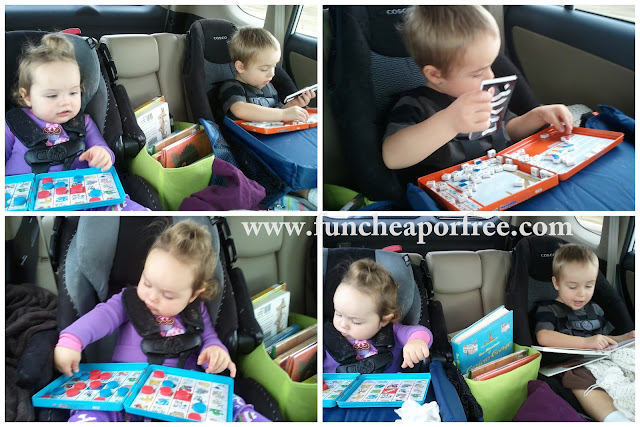 My son also loves magnetic scene toys, where he can move the magnets around and play with them on a background. See amazon link below for what I'm talking about.
I see these a lot in church and have started making them more and more for my kids. I didn't bring any on this trip, but it wouldn't be a bad idea. Online (like this site HERE) you can find and print folder games for free. You color and laminate them, and your kids can play with your home made folder games just like the magnetic scene above.
I printed off a bunch of folder game templates, laminated the pieces, then glued little magnets to the back and bought a metal tin for my son to play with them on. Whether it's a folder with velcro or a tin with magnets, your kids will have a blast!

My genius mother gave me this idea. I bought a pack of various-sized puff balls from Walmart. I gathered some small dixie cups (see below), baby food jars (lids are a definite bonus when considering containers), a pill sorter from the dollar store, and put them in a shoe box.

The idea was for my son to sort the colors of pom poms into various jars. If I had time, I would've color-coded the jars with strips of construction paper or a dot of paint…but it didn't matter because he preferred to dump out all the puffs, then put them back in the jars one by one, disregarding any form of color sorting. 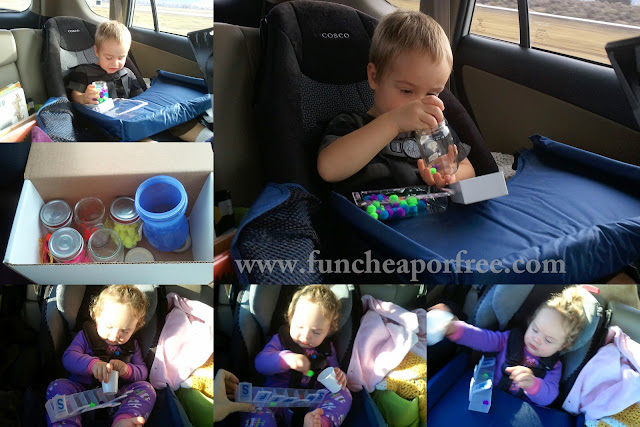 My daughter loved them too. She had fun dumping them on her tray over and over. It really kept them entertained for a while!

I bought some big pony beads and some plastic boondoggle string. I put some in an unused jewelry box and let my son string some beads. He LOVED IT. He kept asking to do it over and over throughout the drive. I only gave him a few beads at a time, so there was no spillage. Hooray!

I didn't let my daughter participate in this one, as you can imagine. However, it would be great to do with cheerios or fruit loops to avoid choking hazards, and to give them something to snack on as well. 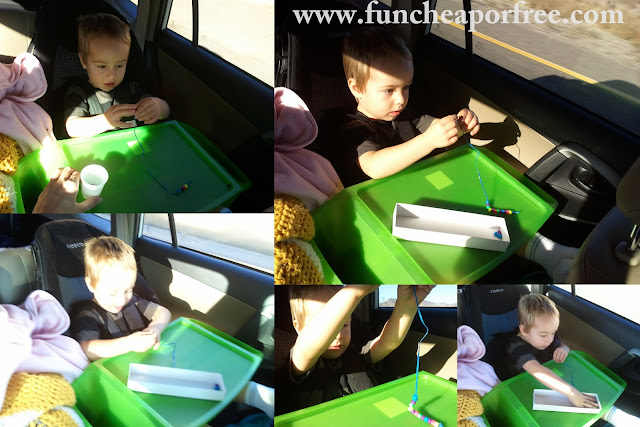 For my daughter instead of pony beads, I bought her a pack of linking heart and star charms from the dollar store.

She had a great time playing with them, mostly putting them in her cup, dumping them out, then doing it again. She tried linking them together but she's a bit young. She ended up dropping many, but they were super easy to find and pick up in the car once we got to AZ.

I bought a pack of 12 hollow plastic balls from the dollar store. I wasn't sure what I was going to do with them, but I opened the pack and gave them to the kids, and they had a good time filling cups with them, then dumping them out on their trays. This was especially great for my daughter since they were easy to grab, see, and pick up if dropped to her sides (inevitable). 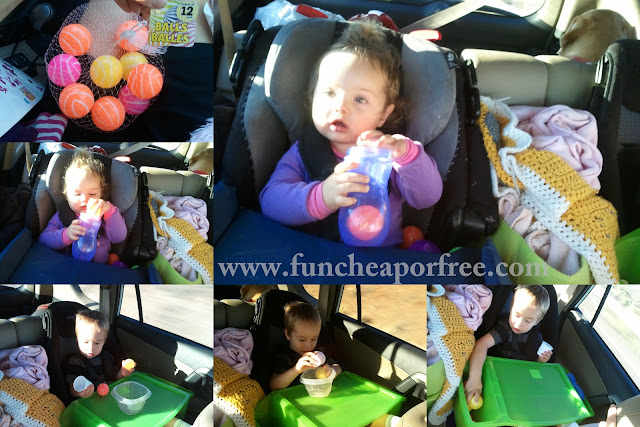 This is a standard go-to activity in the car in my book. BUT…it can be a nightmare if you aren't prepared. Some things I use/love in the car:

is our son's Christmas present from us this year. I gave it to him early so he could use it for the drive (and he doesn't really know the difference of not getting it on Christmas anyway). It is the coolest educational toy!

My kids have really been into stickers lately, especially my daughter. I bought some sticker packs at the dollar store and on Amazon. But what I'm most nuts about (as is my son…) are the REUSABLE STICKERS

. I bought some on Amazon and they are amazing for not only the car, but for church, waiting rooms, etc.

I went to the library with my kids mid-week and picked out a HUGE bag of books. My son got to choose books for him, I grabbed board-books for my daughter, got some books for me, and got lots of books on CD for my hubby who drove the whole way. We put his books on CD on his ipod before the drive so  he could put in an ear plug to listen. It's sometimes hard to hear the CD otherwise.

I kept the bin of books between the kids so they could grab them any time. I kept one bag at my feet that held mine and my husband's entertainment for the drive. We kept the other books/audio books in the back of the car and switched them out at rest stops when needed.
To keep my kids interested in the books (since they can't read) I would read a book to them from the front seat of the car. I would just hold it up so they could both see it. They loved it, and it entertains them for some time.

One thing I learned…you need LOTS of snacks and food for the drive. A) you don't want to buy over-priced food at gas stations, B) it's healthier than fast food, and C) it just plain keeps the parents awake and the kids happy.

I bought a large freezer tote for around $7 from Costco and had that on-hand, but mostly used my small insulated tote.

I found these tupperware containers at the dollar store and am obsessed. They were PERFECT for feeding them snacks and lunch, and also came in handy when they were playing with their crafts and beads.

I make sure to freeze their cheese before the trip so it can thaw out in the car. I also make sure to pack ice in gallon ziplock bags rather than using ice packs, since you can refill ice at any gas station but you can't re-freeze an ice pack mid-trip.
See HERE for my other tips on food and snacks.

So there you go!
Those are some of the things we did on the drive to keep ourselves entertained and happy…
…even the dog.

Best, most secret tip of all…

Keep some size 5 diapers in your glove box at all times. 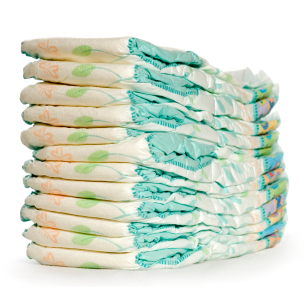 Whaaaat?
I promise, hear me out.
Ok seriously, I can't believe I'm sharing this with you all.
But if it saves YOU like it's saved ME, then it's worth it!
Here's the background…
As I mentioned HERE, I drove by myself with the dog and two kids to Oregon…TWICE.
Yes folks, that's over 12 hours each way.
Four. Times.
My kids refuse to sleep in the car and were melting down because they were so tired. We stopped for gas, I got myself a diet mountain dew to keep me awake, and took off. A miracle occurred and BOTH my kids promptly fell asleep! Well, of course, as luck would have it, I had to pee about 15 minutes later.
BAD. Eyes-watering, pee.
Darn caffeine!
I didn't know what to do. If I stopped, my kids would wake up and would NOT go back to sleep. I looked around my car, found a size 5 diaper in the glove box, and got the genius idea to…
Pee in a diaper!
No, I'm not crazy.
It took some time to figure it out, but I kept my pants mostly on (didn't want to flash any truck drivers), positioned it properly where I was sitting (I'm going to leave out details, but I'm sure you get the picture) and did my thing. Yes, it took me some time to get the courage and I took the slow and steady route.
Wow, is this TMI or what?!
But really, it was miraculous. No problems, clean as a whistle (believe it or not), ain't no thang.
Just like with kids, you wrap it up, and throw it away.
I was not only proud of myself for accomplishing the feat, but my kids slept for 2 hours and now I always keep some large diapers in my glove box – just in case!
WHEEW! So my secret's out.
Good luck on YOUR next road trip!

ULTIMATE GUIDE TO ROCKING YOUR TIME AT HOME

ULTIMATE GUIDE TO ROCKING YOUR TIME AT HOME
Privacy Policy: We hate spam and promise to keep your email address safe