Welp, I've been napping every day, my vision is blurry, my pants don't fit, I'm having crazy-weird dreams, and I've had Top Ramen for breakfast 3 times this week because it's all I can stomach. It can only mean one thing…

Pregnant with Page Baby #6! We are definitely going to need more snow soon… 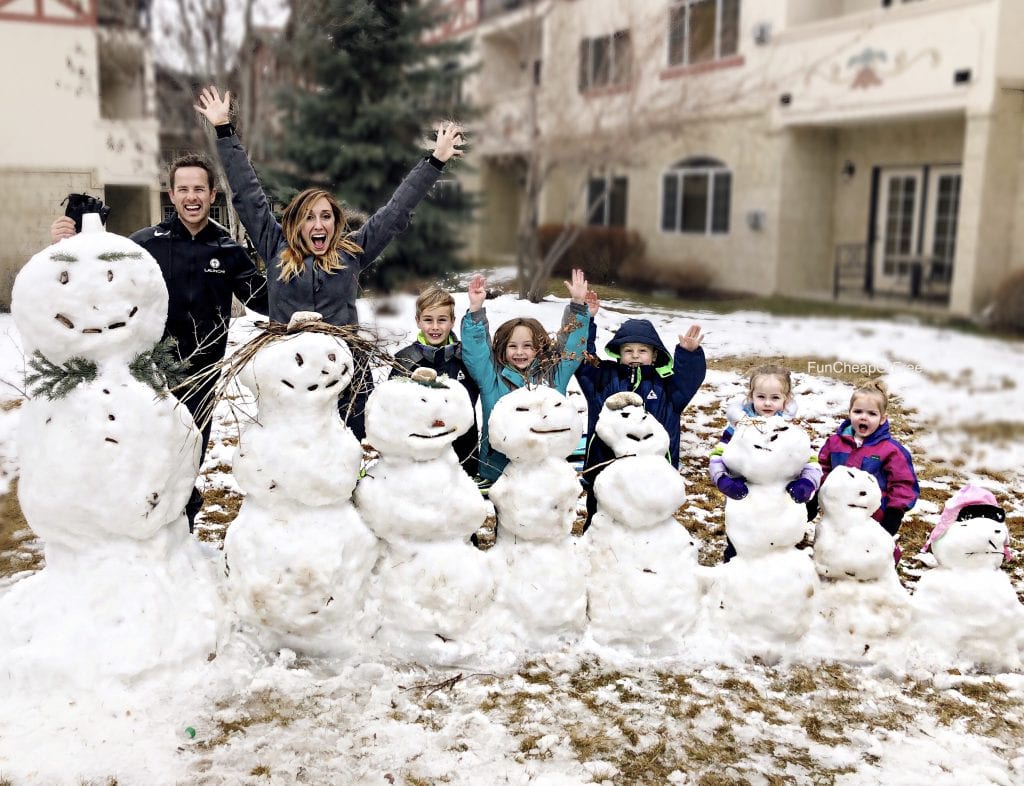 SO many of you have picked up on it already, ha! Probably due to my weird eating habits, constant exhaustion, and breakouts on my face. But still, y'all are very observant!! I know you probably have many questions, so I figured I'd answer them all here for you.

Don't worry, I'm not offended by this question! And yes, you know you were thinking it too (wink wink). Yes, all of our babies have been planned. While several friends and family members of ours struggle with infertility so we are EXTREMELY sensitive to the struggles involved, we have (somehow for some reason) been blessed enough to be able to plan our babies naturally, without infertility assistance.

In terms of number of kids, we have never had “a number” in mind; we have never said “YES! 6 kids! That's our magical number!”. We started with one…waited to see how that went…then moved to two…felt it out…then three…and here we are. We try to live our life by inspiration and the guidance of God, and there was no question in our minds that there was a 6th baby waiting for us in Heaven.

Which brings me to the next question I'm usually asked…

ARE YOU GOING TO HAVE MORE?

Again, it's ok. I know you're probably thinking it too ;). Right now I can hardly eat or function properly, so it's hard to think of the NEXT child when I'm trying to keep this one (and myself!) alive currently. But let's just say, if we feel like there's another baby that needs to join our family, we would bring that baby to earth without question (God willing). If 6 feels complete, then we'd be fine with that too. Again, no solid “number” in mind, we are just taking it kid by kid! Though, we do drive a 10-passenger van now so…

HOW FAR ALONG ARE YOU/WHEN ARE YOU DUE?

I haven't even had my first appointment yet (it's next week) so I'm not 100% sure yet. But according to an app I use (Pregnancy+) it says October 12 is my due date, and I'm 8/9 weeks along. So no, we don't know the gender yet. The reason our snowman is wearing a pink hat in the picture is because it's the only thing we had that was baby-ish. Definitely not the best at setting up a dramatic announcement picture…

WHEN DID YOU FIND OUT? HOW LONG HAVE YOU KNOWN?

Originally we were going to start trying for a baby in the late Spring, maybe May-ish. But a few months ago Bubba and I both felt the undeniable urge to start trying earlier. It took us a few months of failed tests, but then I found out we were pregnant while in Thailand. I brought two pregnancy tests with me – just in case – because timing would allow for me to know at some point on vacation. I actually took a test at the beginning of our trip and it came up negative. But I took another at the end of our trip, and BOOM! Positive. I needed some form of excuse for the various Thai food appetite…

Though, the lighting and glare in this picture is weird so it looks like it's a blank test. I assure you, it's positive, haha. 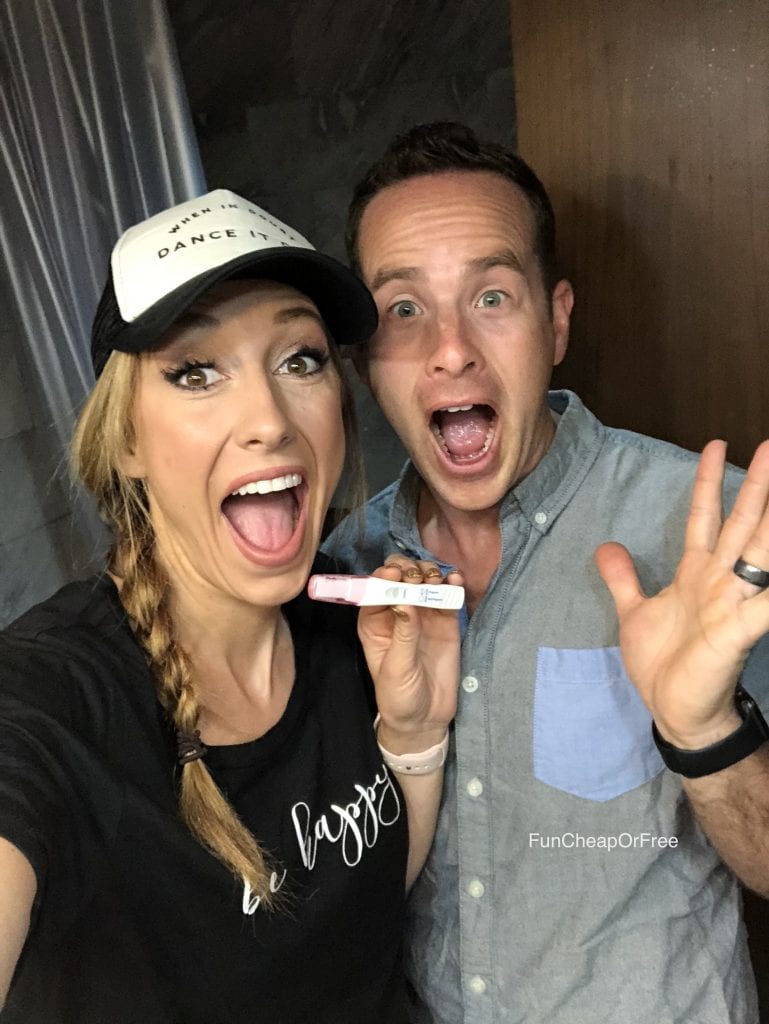 HOW ARE YOU FEELING?

Thanks for asking! I'm tired. SO SO SO SO SO SO SO TIRED. Being pregnant in your thirties is no joke; definitely harder than in your 20's (just as everyone warned). I'm feeling nauseous 80% of the time, but not throwing up (sorry, TMI). I'm grateful to be pregnant but let's be honest, growing a person (especially a 6th person) isn't easy.

HOW ARE YOUR VEINS?

If you don't know, I have a very intense varicose vein story (see all about it HERE). Gross, right? 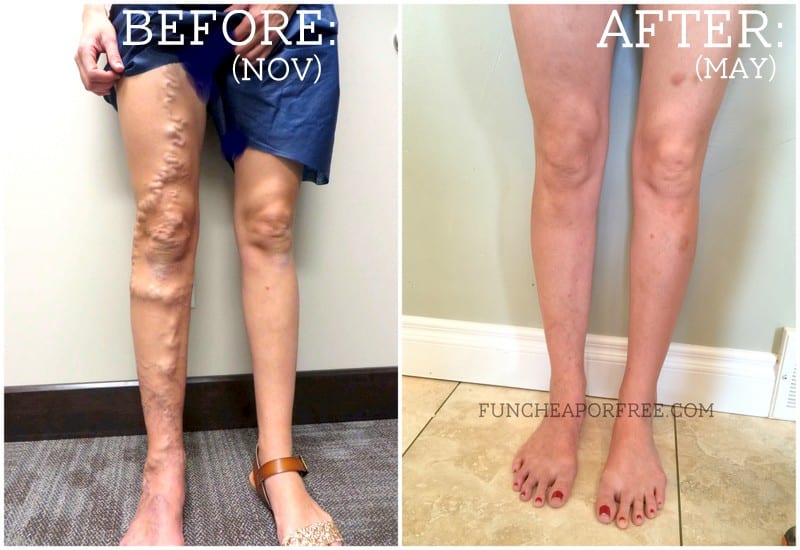 My last pregnancy was so much better after getting my veins fixed! They still cause issues, and I'm already seeing bulging and purple veins, but the ones that have been fixed aren't bothering me any more so that is a GINORMOUS blessing. I will have to continue to get them fixed after each pregnancy, but at least they aren't debilitating any more.

ARE YOU GOING TO FIND OUT THE GENDER?

Yes, at 20 weeks. I try not to do it much earlier than that because the second half of pregnancy is BRUTAL on my body. If I find out the gender before 20 weeks (we found out once at 13 weeks), it somehow makes the pregnancy seem to drag on for-e-ver. Not sure if that's actual logic or not, but I'm always so excited to find out the gender, it makes the first half go by easier. Mental game, I guess?

DO YOU HAVE ANY BABY NAMES PICKED OUT?

Yes and no. I've had a running list of baby names on my phone since before Hutch (our oldest) was born. We loved that list. It was a treasure to us because we would never erase names from it, only add to it, and it's been fun to see the progression of names over time. Sadly, the list somehow got erased from my Evernote app and despite our best efforts, wasn't able to be recovered. I was pretty devastated. Alas, we've started a new list and have written down as many as we could remember, and added some new ones.

I have about 20 girl names I LOVE, and currently zero boy names I'm excited about. So, though we are due for another boy to even the girl/boy ratio, I wouldn't be mad if it was a girl because girl names are so dang fun! And no, we don't choose the baby's name before he/she is born, and we don't announce the name even if we feel like we know what it will be. We like surprises (and I also have commitment issues, so there's that too…).

ARE YOUR KIDS EXCITED?

Yes! They are so excited! The boys want a boy, and the girls want a girl (of course). They are doing a surprisingly good job of grasping the fact that there's “a baby in my tummy” and that it will continue to grow bigger and bigger. They ask me “how big is your baby today?” and I'll pull up my app and show them; “it's a raspberry today!”. It's pretty cute. Mory has no clue and is in for the shock of her life, because she DEFINITELY thinks she's king of the mountain right now…#ImpendingDethroning.

WILL THIS AFFECT ANY OF THE PROJECTS YOU HAVE PLANNED FOR THIS YEAR?

If you've been following me on Instagram or Facebook, you know I have some huge projects in the works!

So there you have it!

Baby #6 due sometime in October! Call us crazy, or call us baby-making machines. Either way, you wouldn't be wrong.

Thanks in advance for the love! It means so much! Now, off to nap…