Follow us
About Jordan, Budgeting Tips, Finances, Get Out of Debt, Inside FCF, Inspire, Motivation, The Stir

Newest member of The Stir family! 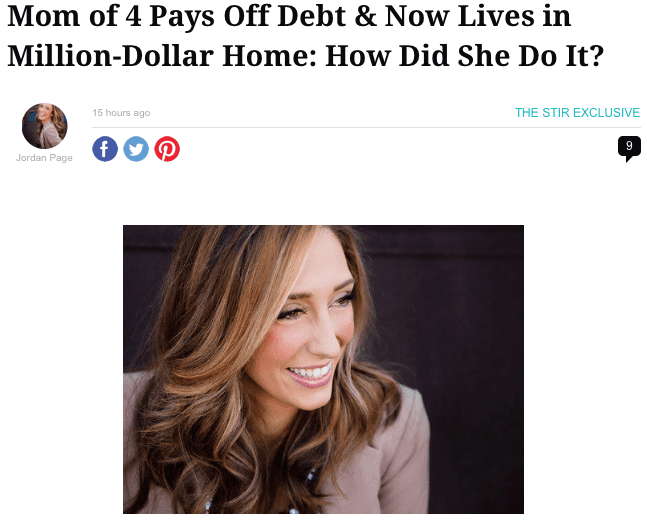 I'm headed to the airport for a wild and exciting Europe vacation (more on that soon!) but had to pop in to share some exciting news…I'm the new Living Frugal columnist for TheStir.com! I'm so honored and flattered that they asked me to be on their team. Their site is pretty addicting, not going to lie. And with 30 million+ readers each month, I'm hoping to make looooots of new friends over there.

My first article was telling a little background on our story and sharing my philosophies and beliefs on living frugal, as well as how we got out of $15K in debt while making only $30K salary. Here's part of the story!:

My name is Jordan Page. I'm wife to a handsome entrepreneur named Bubba(who in no way works with shrimp), a mom of four kids 5 and under (and might be mildly insane since they were all planned), a Utah transplant (but Oregonian at heart), and frugal living blogger at FunCheapOrFree.com.

Yup, life is good. But it wasn't always that way. Rewind five years ago when my family and I fell into horrible debt that we never thought we'd get out of.

My husband of eight years and I fell upon some rough financial times. Picture $15,000 on credit cards, a $500 a month car payment, $0 in the bank because of a real estate venture that went bad, and a new baby in our arms — kind of rough. We found ourselves treading water, and quickly sinking.

I was tempted to take the Well, forget it. We're already in the hole, why not go to Disneyland on a credit card and figure it out later route. But at the end of the day we envisioned life 5, 10, 50 years in the future to be a life of happiness and opportunity, not one filled with anxious worry.

My husband and I were both frugal by nature (not into designer brands, gravitated toward good deals, fine with hand-me-downs and upcycling) but had never been forced to figure out finances like that before. We had no idea where to start. It was like handing a caveman an iPad and telling him to beat your top Angry Birds score.

But one day we looked at each other and made the decision to change; to take control of our situation and determine our own fate. We decided we were tired of just getting by, and were ready to get ahead. And we did.

We sold our souped up Lincoln Aviator, leaving me with my car from high school, while my husband walked to work. We stopped eating out. We shopped yard sales. We made gifts rather than buying gifts. We took turns babysitting with our friends. We took advantage of every free event Salt Lake had to offer. We entered every contest we came across (and won amazing stuff! But that's a story for a different day). I trimmed my own hair, we cancelled our gym memberships and exercised at home, cut our cable and played board games instead of watched TV. The list of things we “gave up” goes on and on.

Want to know the real catch?

The list of things we gained is even longer.

Like losing weight, our new financial “diet” was tough at first. It hurt. It felt weird. It wasn't fun. But quickly it started to change. We saw the “weight” (debt) drop off. It gave us encouragement and confidence, so we pushed harder. Before we knew it we had drawn closer as a family, made better friendships, had more fun experiences and way better stuff than we did before — and found genuine happiness!

In just one year we got out of debt (making just a $32,000 salary, mind you!). In two years we built up a cushy savings. In three years we saved up enough to secure our 5,200 square-foot colonial dream home in a multi-million dollar neighborhood in a suburb of Salt Lake City, Utah (that we bought on short-sale for a screaming deal, of course). Oh, and that high school car? My husband drove it up until three months ago when he finally sold it (in less than 24 hours) and finally bought his brand new dream truck that he's been drooling over since we got married.

Now we live a fabulous life full of love, adventures, and true happiness — all because of how frugal we are, not in spite of it. ”

Read the rest of the article on The Stir HERE!

Again, so flattered and excited to be sharing my tips and love of frugal living withe everyone! Get excited for my next column to go live…”The top 10 reasons why couponing is a waste of time”.

Budgeting Tips, Finances, Get Out of Debt, How To Save Money

The 70% Budget Rule: Afford Spending, Saving, and Investing on ANY Income!

How to Divide Financial Responsibilities in a Marriage — Divide & Conquer!

How to Hold a Money Date Night & Talk About Money Without Fighting!

How To Save Money, Organization

12 Moving Tips That Will Save You TONS of Time & Money