This loaded baked potato soup recipe is sure to be a family favorite during the cold weather! It's super easy, hearty, can feed a crowd, and reheats like new out of the freezer.

Cooler weather calls for warm foods that'll heat you up from the inside out. We call for delicious foods that'll keep you from breaking the budget. Our loaded baked potato soup is the best of both worlds!

This recipe is not only incredibly quick and easy to toss together, but it's an extremely affordable meal. (Hashtag, WIN-WIN.) It's the perfect shelf cooking recipe since it uses things you most likely have on-hand. It's also a great way to use up leftover baked potatoes!

Plus, creamy soup is the ultimate comfort food, so this soup is basically as functional as a Swiss Army Knife. Ready to see what it's all about? Let's get to it!

SHELF COOK YOUR WAY THROUGH OUR LOADED BAKED POTATO SOUP

This recipe is so simple, yet so delicious! There are a number of ways you can change up the different ingredients within this recipe and still turn out with an amazingly tasty loaded baked potato soup. #ShelfCooking for the win!

Pro Tip: If you want a less chunky soup, then use a potato masher once it comes to a boil to knock down any of larger chunks. If you want a super creamy soup, use an immersion blender to get rid of all the chunks!

WHAT TO DO WITH THE LEFTOVERS

Eat them, of course! 😉 You may be surprised, but the loaded baked potato soup leftovers are somehow even better than when it's freshly made. They'll keep for up to a week in the fridge and you can either reheat in individual bowls in the microwave or on the stovetop.

HOW TO FREEZE AND THAW LOADED BAKED POTATO SOUP

This soup freezes spectacularly well! Put it in an airtight freezer container, allow to cool, and stick it in the freezer until you're ready for an easy meal. When that time comes, stick it in the fridge overnight to thaw. Then, reheat it in your soup pot on the stove, low and slow.

You'll never believe that the weird-looking glob of potatoes in your pot will eventually turn back into the creamy potato soup that we all know and love! Just keep stirring it and it'll magically come back to life in no time, right before your eyes.

This recipe is so delicious, you'll be drooling by the time it's done cooking! Stick to the recipe or use what you've got and make substitutions… Either way, it'll be your new favorite loaded baked potato soup recipe. You can thank us later. 😉 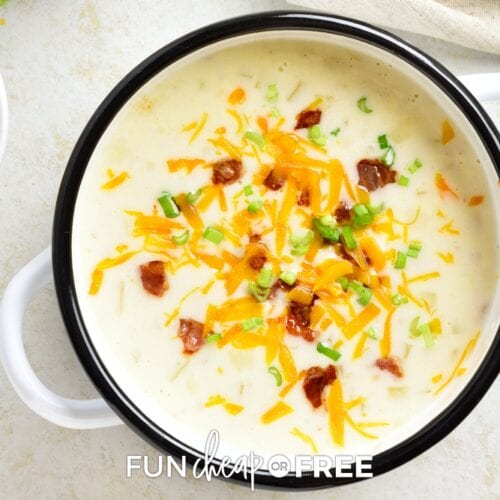 Store leftovers in an airtight container in the fridge for up to a week or in the freezer for at least 6 months. To reheat frozen soup, thaw in the fridge the night before. Then reheat low and slow on the stove. It'll look like it's never going to come back to life, but keep stirring and as it heats up, it'll look just like it did when you first made it!
Keyword freezer, hearty, leftovers

So easy, right? Our loaded baked potato soup recipe can feed an army, but feel free to double or triple the recipe (as long as you have a large enough stockpot!) if you need to feed more people. Serve with your favorite crusty bread and you'll have a new family favorite!

Easy peasy, right? Give our loaded baked potato soup a try! Let us know if your family loves it as much as ours in the comments below. Just don't stress out so much about the recipe. It really is fail-proof. Add ingredients until it tastes good and POOF. There you go!

Have you checked out ShelfCooking.com yet? Our brand new site is dedicated to helping you cook delicious, homemade, down-home-cooked meals for your family without spending too much time in the kitchen!

Butternut Squash Soup: World's Easiest and Most Amazing. Ever.

You NEED to Try this Easy, Yummy Sweet and Sour Meatballs Recipe