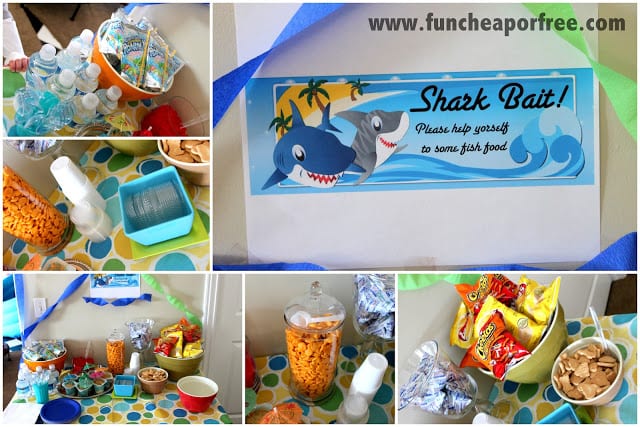 My son turned 3 on January 26th. I wanted to throw him a party, but it was a crazy week leading up to his birthday (I had Frugality Boot Camp 2013, lots of family in town, a family funeral, oh yeah, and I kept going into early labor)…
…so I needed it to be SIMPLE but FUN.
I actually had to postpone the party for 1 week because of the unexpected funeral. The up-side was that all our family came to town so we were able to do a fun, family birthday party for him on his birthday. BUT…I still wanted him to have a party with his little friends.
We ended up having about 12 kids here (most of them around 3 years old…wild!) and many of their parents hung out too.
He is really into sea-life right now (thanks to our local aquarium and our trip to Sea World over Christmas…) so I made him a little ocean party!
Here's how I did it on the cheap AND easy:
I used Evite.com to design the invitation and make the guest list. I like that site because people can RSVP easily with a click of a button…and RSVP's are crucial!
So I found this cute little shark invite design:

(This doesn't matter much, but I actually ended up doing the party from 3:30-5:00. It worked nicely because it was after school and naps, and before dinner.)
For decorations…
I took a screen-shot of the invite, erased the words in Gimp (free Photo Shop), and reused that design for the signs throughout the party (front door sign, food sign, etc).
I kept the decor REALLY simple…
streamers (2x$1 at the dollar store)
and $.99 packs of balloons from Walmart. 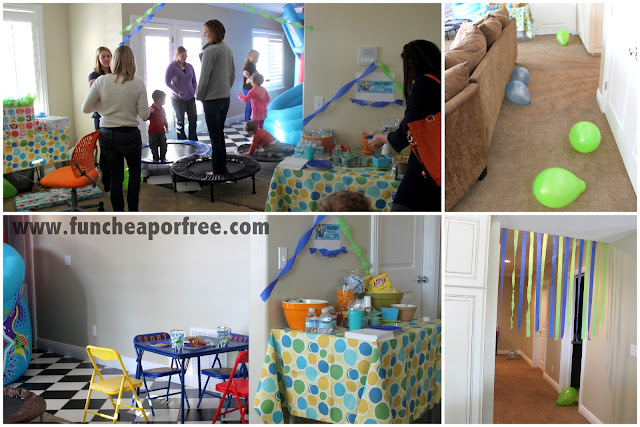 I didn't get a good picture of this, but I had streamers strung all over the ceiling of my basement to make it feel more “ocean-like”.
The table cloth was leftover from my son's 1st bday, if you remember HERE.
For food…
I stuck with the “ocean” theme to an extent. 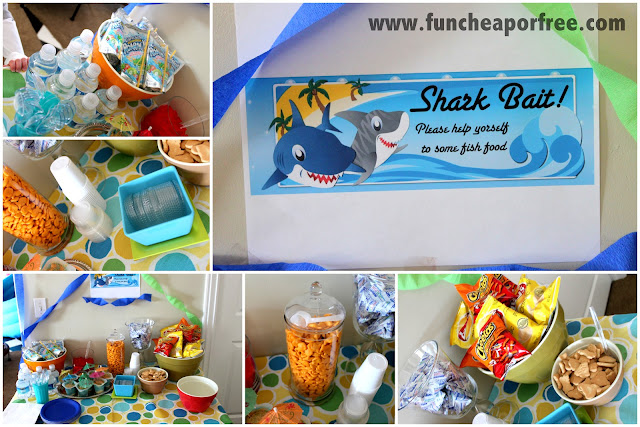 All the food (except the pudding cups that I'll get to in a sec) I had lying around, making it cheap and effortless:

I came up with these little pudding cup beaches to serve as well: 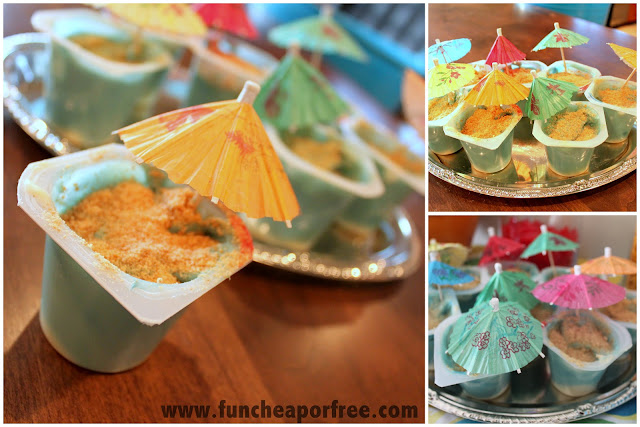 I simply bought pre-packaged sugar-free vanilla pudding ($0.25 ea), put some blue food coloring in them, and sprinkled crushed graham cracker on top. I found these drink umbrellas in the party section at Walmart.
For activities…

Once again, I kept them really really simple! The only thing I did was bring down a bunch of toys and put them in the corner of the room for kids to play with, and I drew a shark without a fin to play “Pin the Fin on the Shark”…which we never actually got around to playing because the kids had so much fun….
…with THIS! 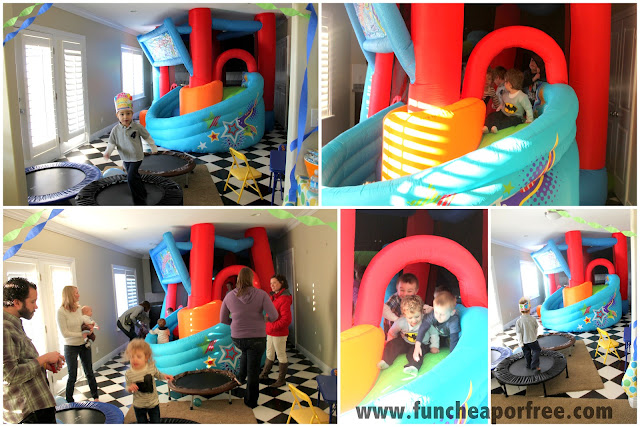 I bought a 15 foot bouncy house! So. Stinking. Cool.
Well, technically it was free, which makes it even cooler.
Ok, let me explain…
Many of you know that I love the website Zulily. I've found some great deals on there. Every person gets their own unique referral link, so I've been spreading the word like crazy to people. You get $20 for every referral that purchases something for the 1st time, so my store credit has been building up for some time.
I've been waiting for the PERFECT thing to buy, and this baby came up: 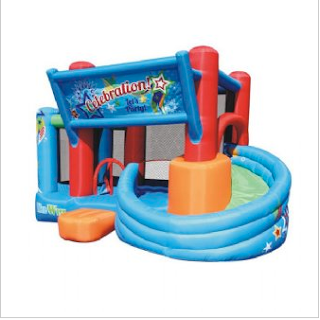 We had been wanting a bouncy house for a long time because some family and friends have purchased smaller versions and say it's a great investment for their family for parties, summer time, etc.
I had enough credit, so I bought it! It wasn't supposed to come for weeks but the Birthday Gods were smiling upon me and it arrived the morning of this party.
And let me tell you, it's huge, and it's awesome. The kids had a blast!
Needless to say, no one was interested in Pin the Fin on the Shark…
For the cake, I just did homemade (from a box, of course…) cupcakes (figured they'd be easier for the little guys to eat). I put a simple “H” candle in the top cupcake, and called it good! 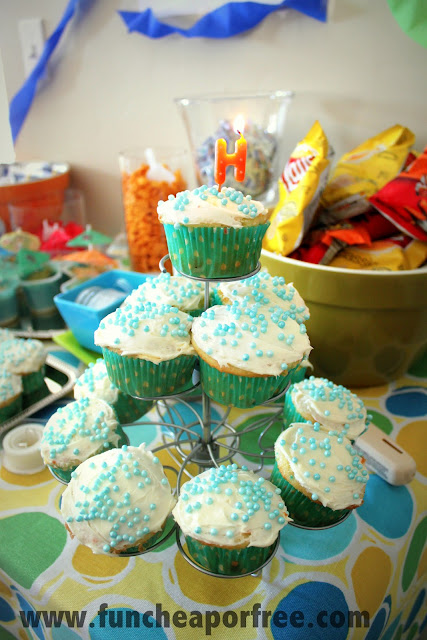 The kids ate and played, Hutch opened presents, the parents chit-chatted, they bounced their little hearts out, and it was fun, cheap, and EASY!

My son got a TON of gifts. I let him choose 2 or 3, and I put the rest away in the closet under the stairs (I did the same with Christmas). Then, throughout the year I have new toys to rotate in. Otherwise he gets bored of his toys so quickly!
For take-home gifts…
I picked up little trinkets at Walmart and the Dollar store and put them into clear treat bags. I simply stapled a “thanks for coming” paper to the top. 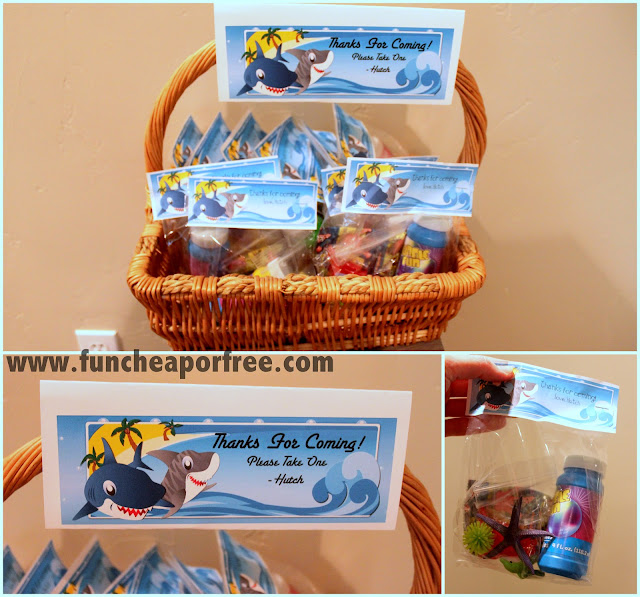 I filled the bags with bubbles, Spongebob Squarepants fruit snacks (the only under-water ones I could find), and some sea creatures.
It was a fun day, and was pretty easy-peasy for me. Happy birthday Hutch, love you buddy! 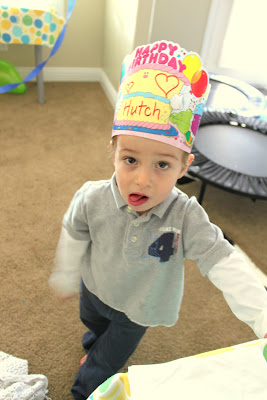