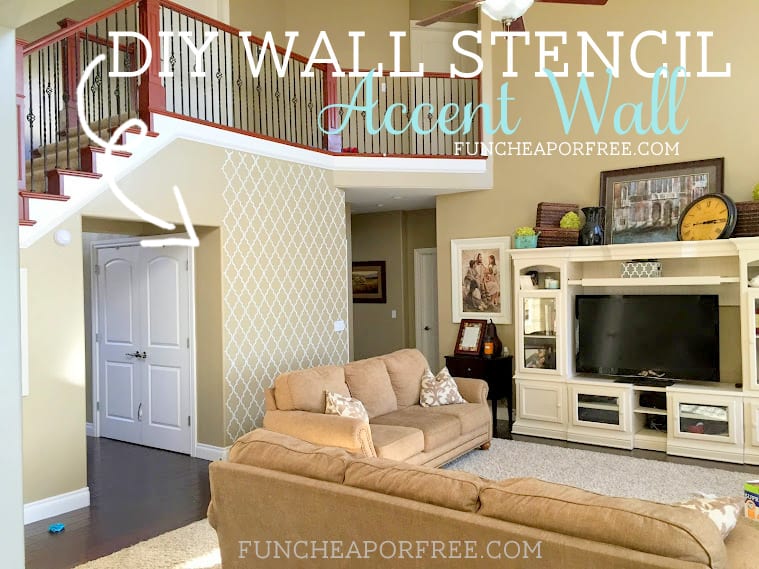 So…you know how I'm majorly nesting because baby girl is coming in 3 weeks or less? But you know how I am NOT much of a DIY gal and tend to break out in hives and have to breathe into a paper bag when I walk into a craft store? Thus, I've been focusing a lot on projects that make a BIG impact, with SMALL amounts of work/effort/brainpower/cost (like THIS and THIS)? Well, brace yourself…

I did a DIY quatrefoil wall stencil accent wall project last night that was seriously so simple even I somehow pulled it off! It's now the prettiest little accent wall. It makes me want to propose to it whenever I walk by. But that would be weird. And probably illegal. So I won't.

To be completely honest there's not much to it, so I'm not going to pretend to be a wall stencil genius or anything. But since so many of you went gaga over it on Instagram, I thought I'd take a minute to show you how I pulled it off (in less than 2 hours, mind you!). So here's my own DIY quatrefoil wall stencil tutorial for those who are interested! (And be sure to check out how I stenciled my kitchen HERE.)

Pssst…Enjoy the fun game of I-Spy while you're at it, since I don't believe in “Pinterest-perfect pictures” since it's not real life…and ain't nobody got time for that. 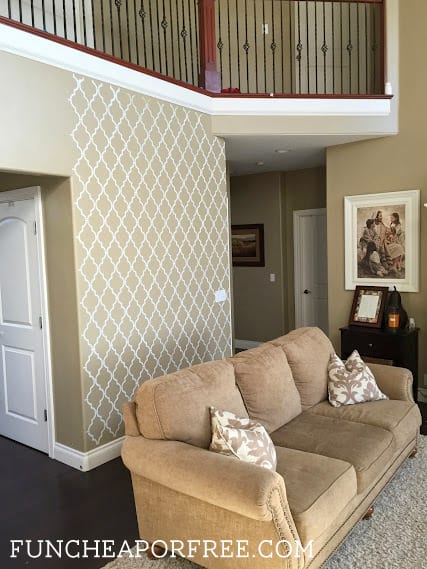 I spy…an unfinished corner. Can you find it? Explanation on why it's unfinished below.

Here's what you need:

Here's how you do it:

If you want to hear from the pros, see how to stencil HERE. If you want my novice take on it, keep reading 🙂 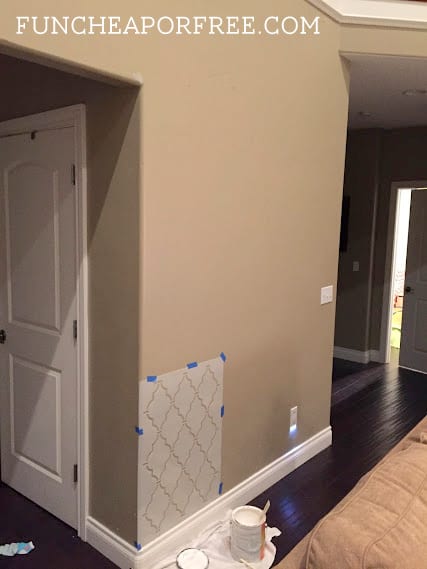 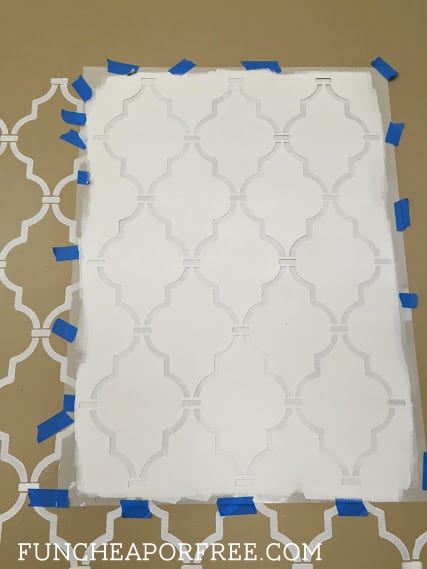 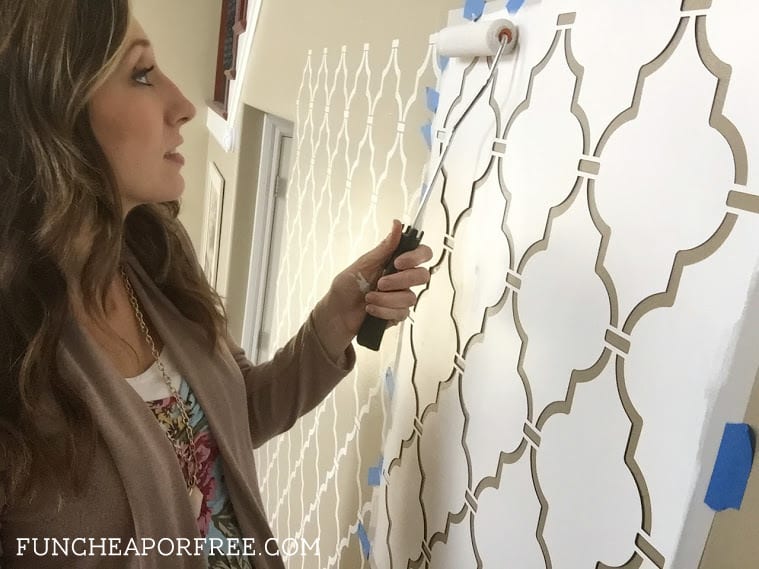 for the first time, pretending to paint with my useless left hand from the top down which is the opposite of how you should actually do it. I have no idea how fashion bloggers do all this selfie stuff all the time. 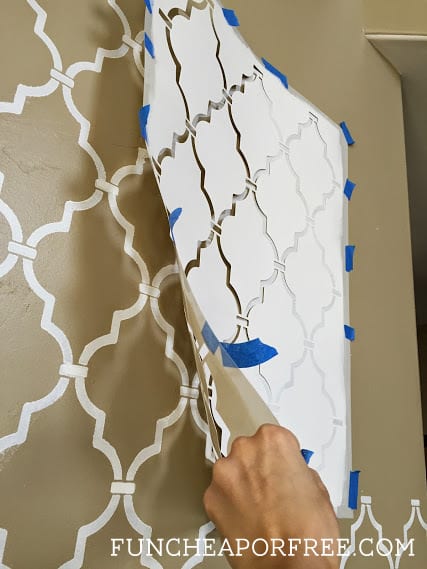 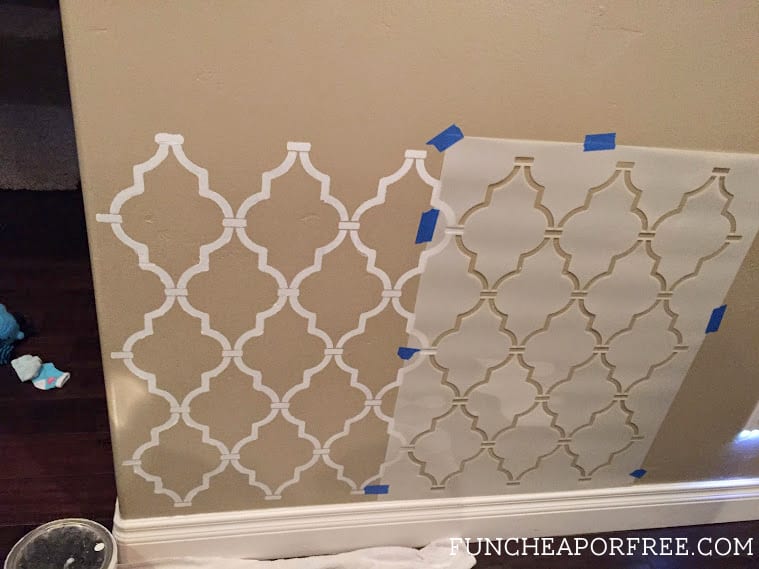 I spy…even more socks. They seem to multiply around here. 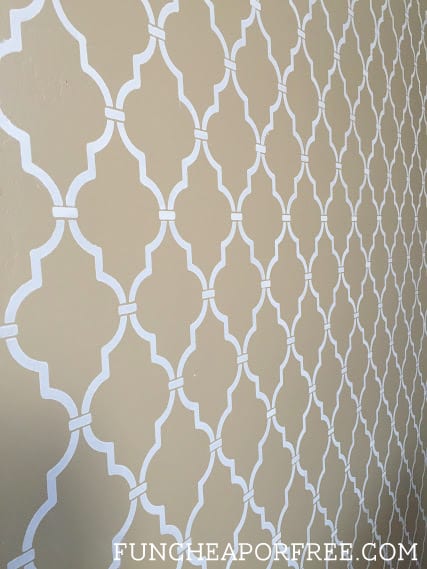 I turned on The Voice on my DVR and went at it…then I got tired and bored after an hour and decided to call it a night. What can I say, my heartburn and braxton hicks were killing me. But this is how far I got, which is not bad progress for one hour, being 36 weeks pregnant right?? Just shows how easy it was. 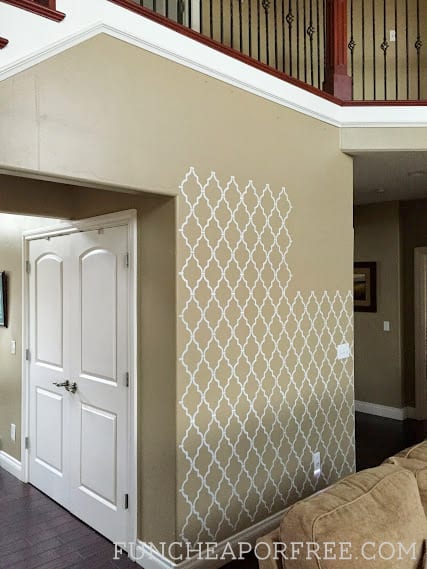 After recharging my batteries I finished the project the next day while my kids were napping. 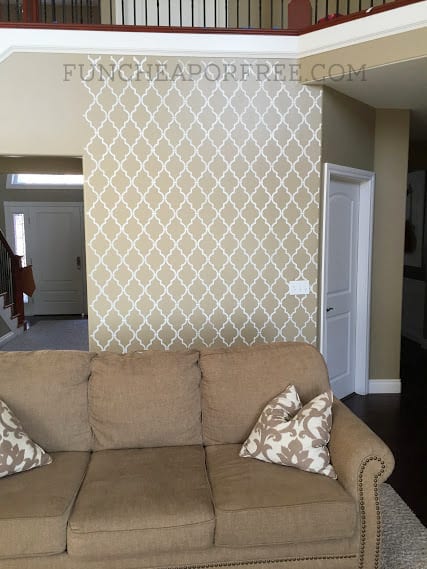 I spy…a cushion that is upside down, most likely done on purpose to hide a stain.

The toughest part was the very top row. That wall is TALL! I'm 5'9 and had to pull up a tall kitchen chair to reach, painting over my head while holding the stencil down as best I could using my selfie pole (lucky I had it lying around, eh?). Yes, it was as comical-looking as it sounds.

I went slightly out of order at the end because of that awkward little hangover part of the ceiling. 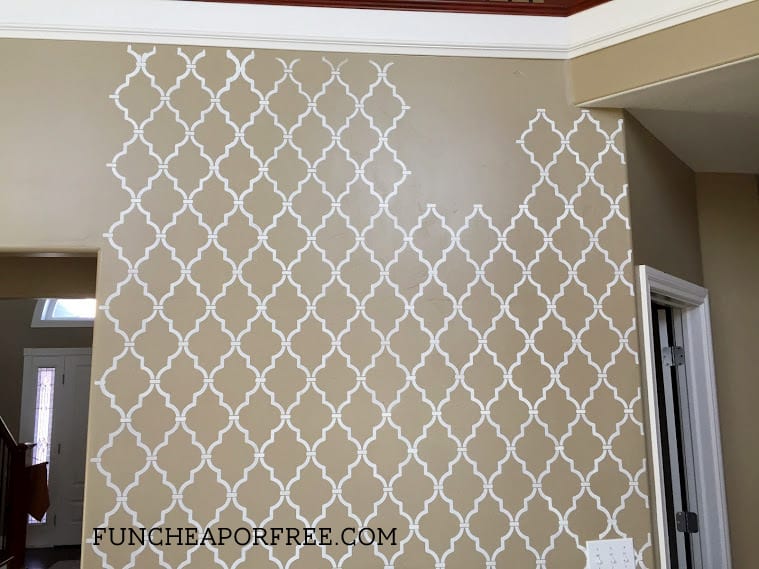 But I finally got it figured out well enough.

Why the unfinished corner? 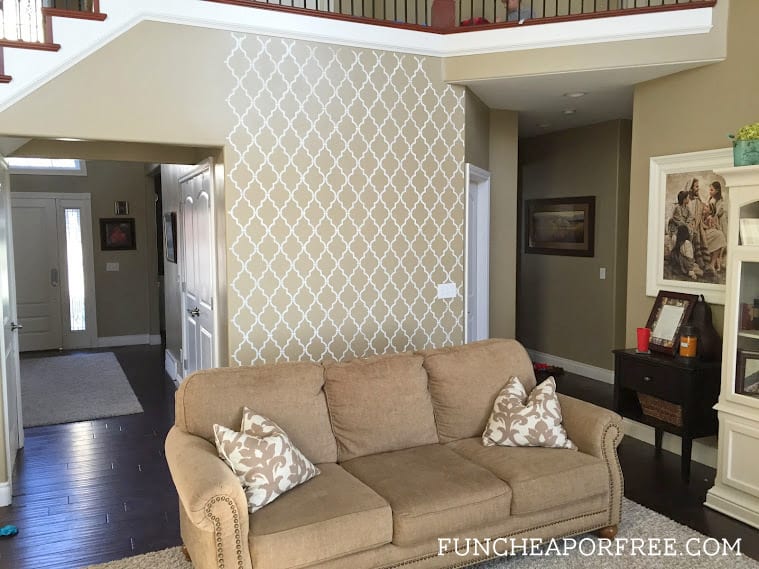 I spy…a blue silk hair flower, a red cup, PJ's left out from the morning school scramble, and someone who woke up from their nap and tried to sneakily watch what I was doing.

There was no way to line up the stencil nicely with the white molding on the top like I could with the moulding on bottom row, because of how the stencil design lined up with the existing stencil marks. The molding hit right in the middle of the stencil making it really hard to tape down and keep flat while trying to paint over my head.

I did my best, but ultimately if you look closely you'll see an unfinished corner where I simply couldn't get the stencil to lay flat. The top row of stencils needs to be touched up by hand because I could barely reach it with the paint roller. I decided I'll let my hubby grab the tall ladder and finish that part so I don't crash to my death in the process (I'm ultra clumsy when pregnant!). 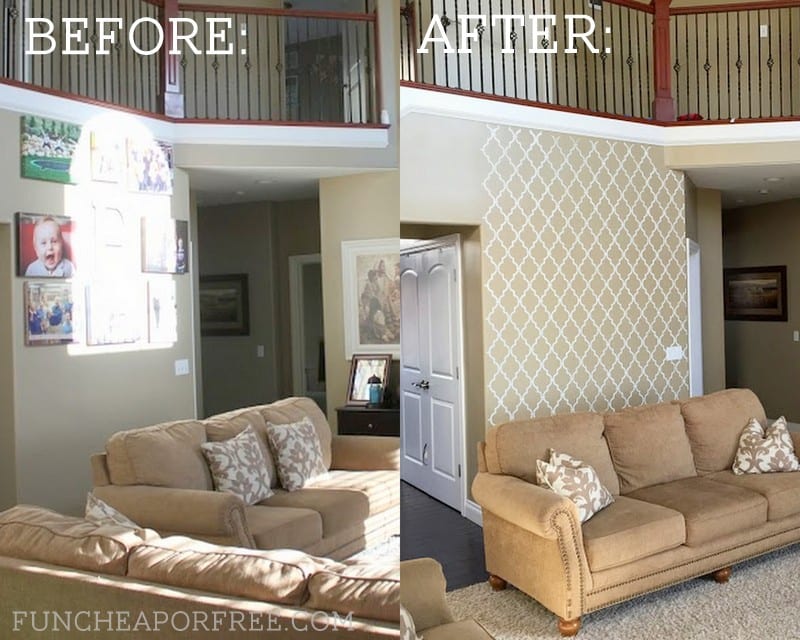 I spy…a major reflection from my tallest window, making it hard to even see the photo collage wall in the “before” pic, but it's the only pic I could find because I failed to remember to take a real “before” pic. Oops.

I am SO HAPPY with how this wall turned out! This has been an awkward wall that we haven't known what to do with for years. It started out as a modge-podge photo collage wall: 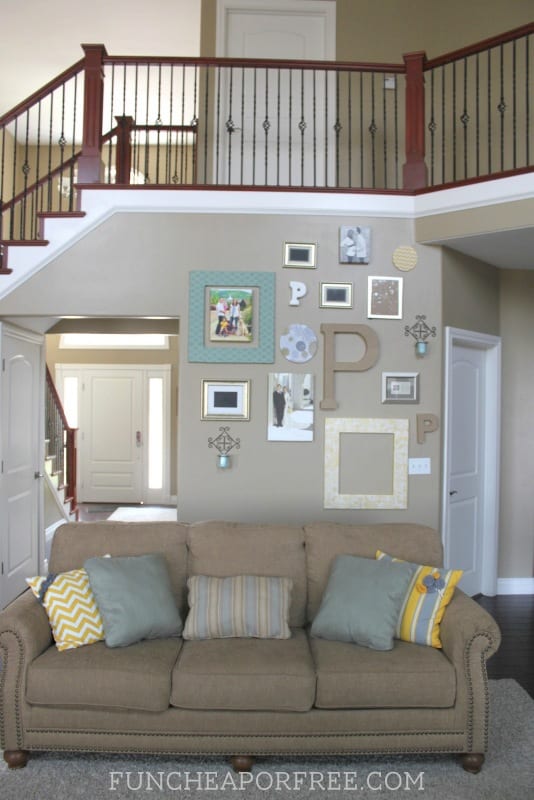 I spy…mostly empty picture frames that were never filled because of pure laziness and indecisiveness.

It then morphed into a photo canvas wall: 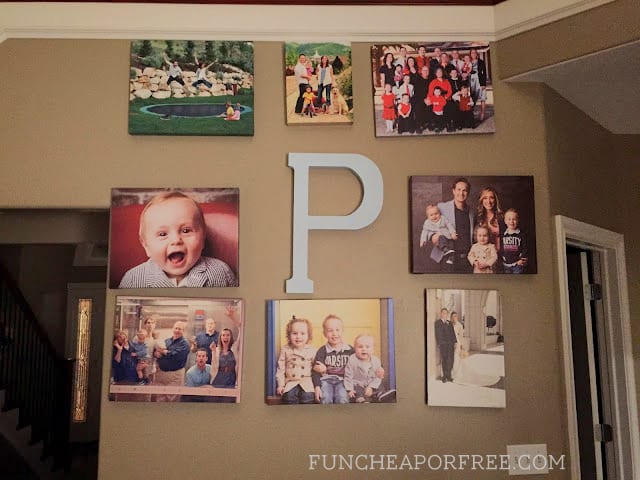 I spy…unbalanced and crooked canvases because we tried to use existing nail holes and nails because of my decor commitment issues…then we got used to it and failed to ever take them down and line them up properly.

The plan now is to get updated family pics once the baby is born and continue with the canvas collage wall idea. Only this time we promise to line them up straight and make new nail holes if needs be. Cross my heart. Brownie girl finger salute thing. 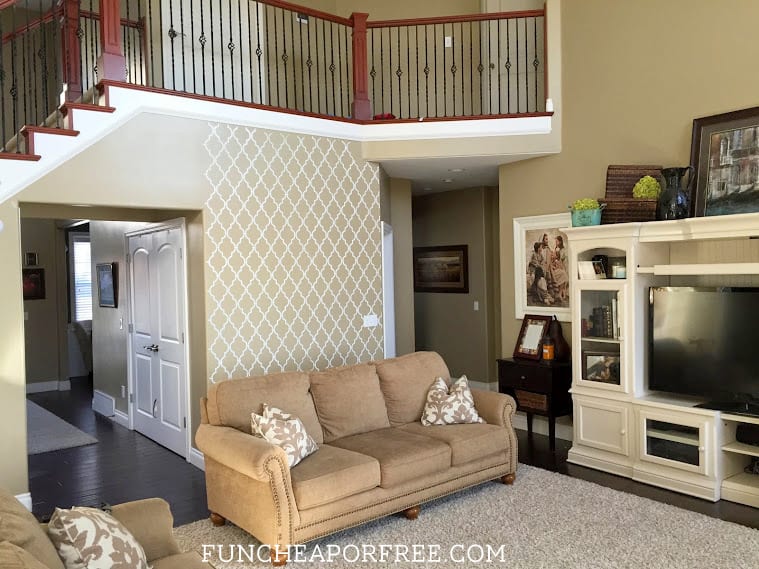 So what do you think? Do you like it? Would you leave it plain or hang photos over the stenciling? Is this a project you would do? Leave a comment and share!

Beauty, Budgeting, How To Save Money, Lifestyle

10 Tips to Pamper Yourself on a Budget

A Kool-Aid Playdough Recipe Your Kids Will LOVE

Easy DIY Christmas Cards - How to Make Your Own for Cheap!

20+ Genius Upcycling Ideas: Learn How to Turn Your Trash Into Treasure!