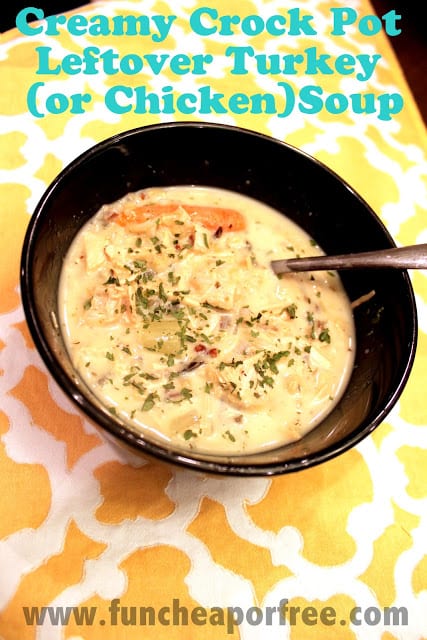 Lately I've been cleaning out my freezers (small chest freezer in the garage and fridge/freezer in my kitchen) using my Freezer Inventory Tracker printable (found HERE). I needed to make room for freezer meals in preparation for the arrival of Baby #3 on monday…
…and boy, were my freezers a mess.
In going through and inventorying my frozen goods, I found a LOT of stuff that I needed to use up.
It's turned out to be a blessing because it allowed me to use much of my weekly budget for V-day goods, baby gear, diapers, lots of playdates and lunches with girlfriends (trying to distract myself from how ready I am to have this baby) and non-grocery items.
I found a HUGE bag of leftover Thanksgiving turkey that I almost threw out.
It looked gross,
Was a TON of turkey,
I had completely forgotten it was in there in the first place,
and I just don't really like turkey that much so I figured it was ok to toss it. (Shame on me!)
BUT…
Being the OCD non-waster I am, I decided to find a yummy use for it…
AND I DID!
This soup is SO easy, SO good, *pretty* healthy, and can be used with chicken instead of turkey.
Total winner, folks.
Introducing: 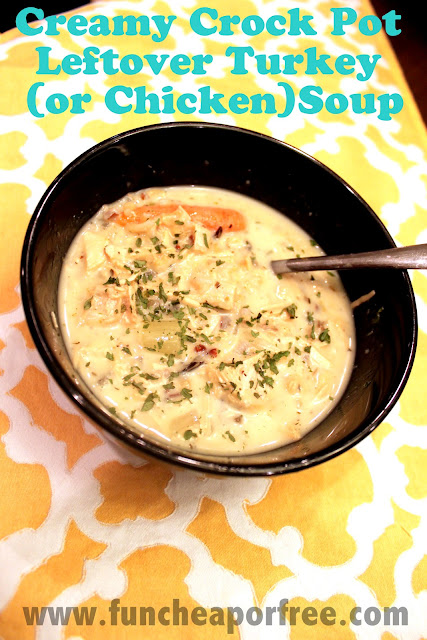 I let the enormo bag of turkey thaw out overnight. I then chopped it up along with any veggies I could find in my fridge…which were pretty minimal. I chopped up 1/2 an onion too, not pictured here. 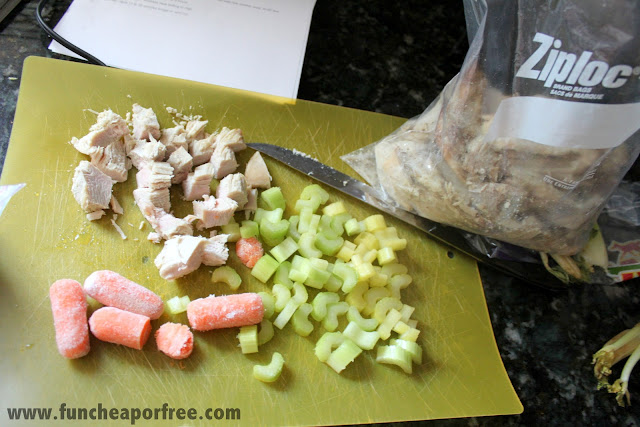 I only had a few carrots, but found this frozen bag of leftover carrots from a party I threw.
Bingo. 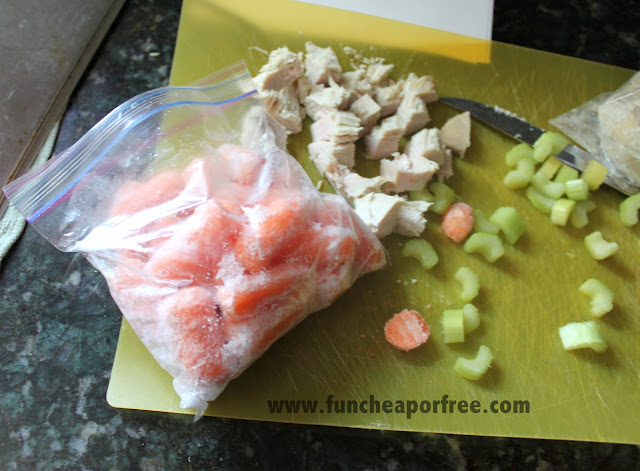 I started trying to dice them while frozen, but that's way too hard, people.
So I threw them in whole.
Me = not picky, and lazy.
I tossed it all in a crockpot along with a can of cream of mushroom soup, a can of cream of chicken soup, 6 cups of water and enough bouillon to “make” chicken broth (because I didn't have any), and rosemary, sage, ground pepper, garlic pepper blend, and thyme to taste. 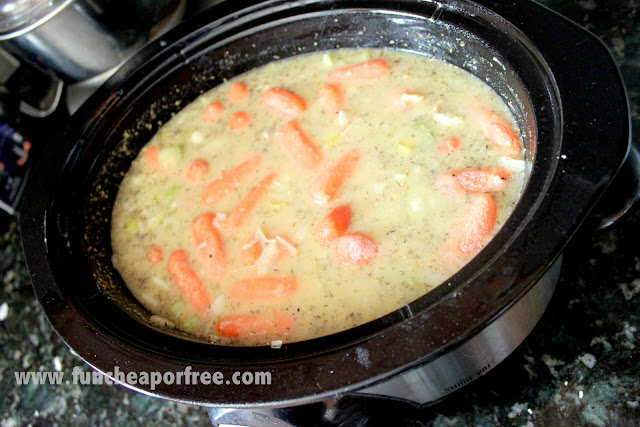 I tossed the crock pot on low, and let-‘er rip!
An hour before I was ready to serve dinner I cooked up 1C of this wild rice mix from Costco. 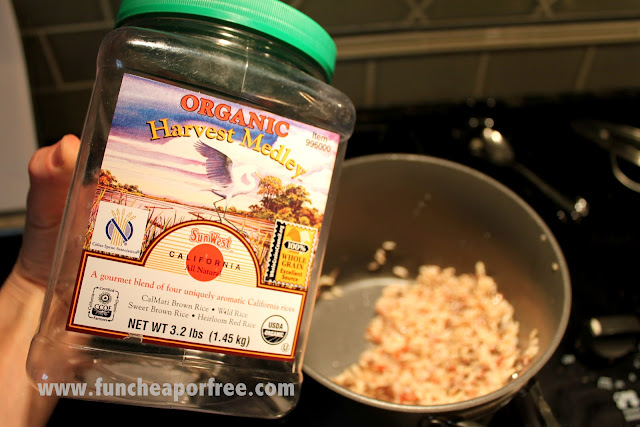 Once fully cooked, I added the rice to the soup as well as some half-and-half (making it even creamier…mmmm….) and let it simmer until dinner was ready.
That's it! So easy! 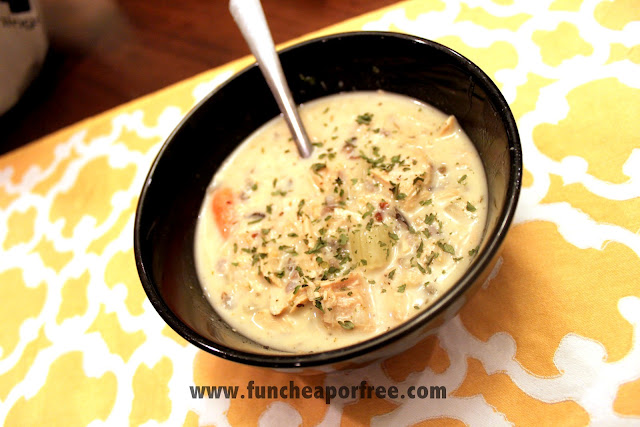 My picky kids couldn't get enough of it. The flavor was amazing. And I have to say, the turkey was the star of the show – it was the perfect flavor and texture for the soup.
Who woulda thunk? 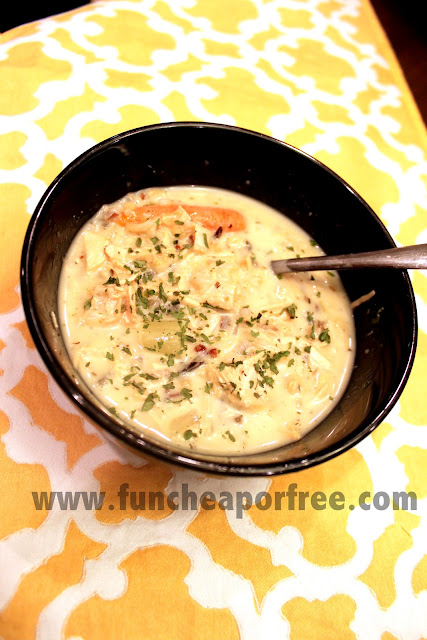 I served it with some toasted french bread and we gobbled it up!
Click HERE for the printable version of this recipe:

Directions:
1. Place turkey, onion, veggies, canned soup, and chicken broth in greased crockpot. Stir to mix well.
2. Cover, cook on low 7-8 hours.
3. One hour before cooking, cook up wild rice according to package directions. Add rice and half-and-half to soup. Let it cook on low until ready to serve. Add more broth if needed. Serve with crusty bread and a green salad, and enjoy!

NOTE:
I made a LARGE batch of this soup so I could take some to a new neighbor that moved in. Here's how I adapted it:

So, as you can see, this recipe can be made in the crock pot OR on the stove. It's a winner either way, I can't wait to eat it as leftovers tonight! I made such a big batch I'm going to freeze 1/2 to eat when baby comes, I'll let you know how that turns out.

Check out these other great posts: 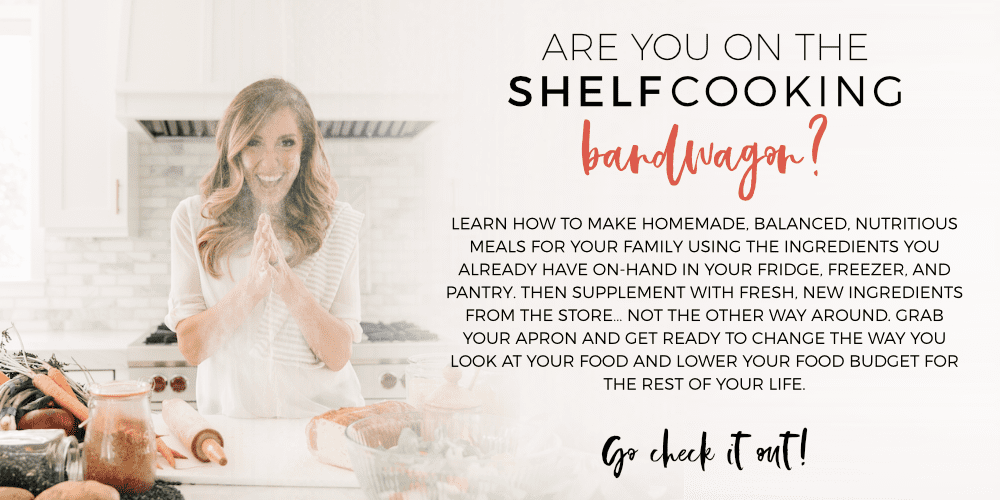 Have you checked out ShelfCooking.com yet? Our brand new site is dedicated to helping you cook delicious, nutritious and budget-friendly meals for your family without slaving away in the kitchen! Basically every parent's dream, right? Join our Shelf Cooking Community today!