Ham makes for the perfect, easy Sunday meal, but sometimes you just don't want to have your oven on for that long. The good news is that you don't have to! Make this deliciously easy slow cooker ham and never use your oven to cook one again.

Ham is one of those meats that you can cook for the masses and it feeds so many without being overly expensive. It makes the best leftovers and freezes really well! But that oven? It can definitely make your house hot whenever you really don't want it to be. What's a Freeb to do?!

*Enter the slow cooker* Yes, you read that right! This slow cooker ham recipe is so simple, you'll be wondering where it has been all of your life. Just 3 ingredients and minimal prep time will have your ham cooking in no time!

ALL THE SLOW COOKER HAM DEETS

Before we get into the nitty gritty of the slow cooker ham, let's go over a few of the basics! You'll learn how to cook a ham that you already have or pick out the perfect one at the grocery store.

WHAT CUT OF HAM TO USE

Luckily, pretty much any type of ham works, as long as it's fully cooked! You can use bone-in or boneless, but the bone will help to keep your ham moist and give it more flavor.

A spiral-cut ham is more convenient, but it will dry out quicker than a whole ham will. If you choose to go with a spiral-cut, then you may want to put some additional liquid in the slow cooker. You can also baste it halfway through, but keep in mind that when you take the lid off your slow cooker, you lose heat and it'll take a little longer to cook.

You can even cook your ham from frozen! It will take longer, but it's nice to know in case you decide to make this slow cooker ham at the last minute and you haven't had the time to thaw your ham. Double the cooking time and check it about three-fourths of the way through to make sure that it's not going to be over cooked.

WHAT SIZE HAM TO USE

An 8 pound ham works best in the slow cooker and it should fit easily. If not, just trim it a little until it does. If your ham is smaller, no worries! Just adjust the cooking time so that it doesn't get overdone and dry out.

HOW TO COOK A HAM IN A SLOW COOKER

It's just about the easiest thing, EVER! Grab your slow cooker and line it (because why not make clean up super easy?!). Throw your ingredients in it and get to cooking! Set your cooker to low for 4-6 hours. The perfect temp for a ham is 140°F and you can check it with a meat thermometer to make sure that you don't overdo it.

Okay, enough with the chit chat! Let's get on to your new favorite way to cook a ham that is minimal effort and maximum flavor. 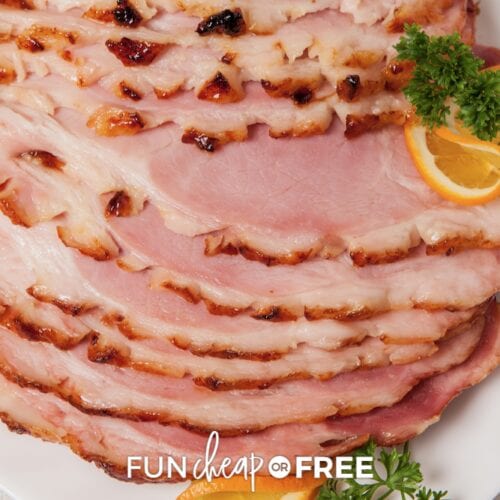 Put any leftovers in an airtight container in the fridge for up to a week. You can also freeze them and they'll taste just as good!
Keyword easy, holiday

See, we told you it was easy! Ham is such a versatile meat and it can be served with a variety of sides, such as a strawberry spinach salad that you definitely need to try out. Make some homemade bread to go along with it and you've got it made!

What are your favorite sides to pair with your ham when you make one for dinner? Let us know in the comments! We're always looking for new recipes to try out! 🙂

Have you checked out ShelfCooking.com yet? Our brand new site is dedicated to helping you cook delicious, homemade, down-home-cooked meals for your family without spending all your time in the kitchen!

The Best Ham Dinner and Our Favorite Side Dishes!